Know Your Water, Know Your Responsibilities 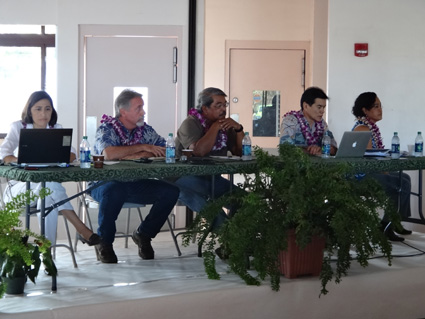 Water is an essential component to life –without it, we would cease to exist. Few know this better than the agricultural farmers of Molokai, who each use nearly 6,000 gallons of water per acre per day, according to Alton Arakaki, extension agent for the University of Hawaii –College of Tropical Agriculture and Human Resources (UH-CTAHR). While water is so important, many residents and farmers don’t know where it comes from, who’s responsible for it and what policies govern its distribution. In order to educate and guide the community in the ways of water, a panel was held on Molokai last Friday to provide information that is important to understanding the use of agricultural water on Molokai and its distribution via the Molokai Irrigation System (MIS).

“Water has always been an issue for Molokai,” said Arakaki. “ Now is the opportunity for the community to listen to issues, prioritize them as a group and then take it forward –that is how they’re going to affect policy issues. On the individual basis, it is very difficult to advocate for something, but as a group, it is more possible.”

“Water is life –you can go without electric but you cannot go without water,” said resident Judy Caparida during the workshop. “It’s important that we on Molokai know what is going on because we need water for future generations.”

Where Does Your Water Come from?
The MIS, which represents the primary source of agricultural water on Molokai, distributes water to over 230 users in central Molokai, ranging from large to small-scale farms, homesteaders and non-homesteaders and for-profit as well as back-yard agricultural operations. It is an active, state-operated system that is managed and operated by the DOA.

The process begins at Waikolu Valley – a lush and remote north-facing valley where rain falls at an average of 120 inches per year, according to the University of Hawaii. At an elevation of 990 feet, the water is pumped from the valley’s primary stream. Here the system includes three gravity flow intakes which divert water from the stream, four wells that are actively pumped, and an additional three wells located at lower elevations.

All of the water collected in Waikolu Valley is fed to a five mile long tunnel which gravity-feeds water to the southern-facing slopes of Molokai above Kaunakakai. Water then exits the tunnel through a filtering grate and flows through a short length of underground pipe to a transition box, where water can be diverted when the transmission pipeline needs servicing. The water then flows through a 1600-foot covered concrete flume to another transition box that serves as an overflow in case there is blockage further down in the system. From here, the water travels west through 3.8 miles of pipeline where it collects at the Kualapu`u reservoir for storage.

The reservoir, which was completed in 1969, has a total capacity of approximately 1.4 billion gallons, a depth of about 50 feet of water. Its current level is at approximately 14.5 feet. It is equipped with a bypass valve and spillway in case of emergencies. The outlet of the reservoir connects to an underground pipe that distributes water throughout central Molokai. The MIS distribution system ends west of Ho`olehua in the Mahana area.

Molokai Ranch uses the MIS to transport approximately 413,000 gallons per day of drinking water to west end users via a private system. The Ranch’s usage is recorded daily by MIS staff.

“[The MIS] has allowed both agri-business and Hawaiian homestead farmers and other entrepreneur farmers to successfully coexist,” said MIS water user advisory board member Adolph Helm in a video tour of the MIS system that was shown last Friday.

Improvements to the System
According to the video presented by the DOA, the MIS system is approaching its project life and needs to begin replacement of its major components. The system, which was originally scheduled to have four stages of development that would allow for transport of over 20 million gallons of water per day (mgd), only ever saw the completion of stage one, which was finished in the 1960s and currently has a capacity to transport two to three mgd, according to Teruya.

Current capital improvement projects include the replacement of a primary electrical cable that runs through the Molokai Water Tunnel that was originally installed in 1969, said Teruya. Additionally, part of the $1.25 million budget for improvements were appropriated to update mechanical equipment that pumps the water in Waikolu Valley.

The DOA has also received funds from legislature –approximately $2.75 million –for the installation of a system control and data acquisition (SCADA) system, which would allow maintenance workers to remotely control the pumps in Waikolu Valley without having to hike to the pumps, which would save time and money, according to Teruya.

Lastly, the DOA is currently in the design and planning stages of developing a micro-hydro power plant in the tunnel that will help offset electrical costs by roughly $240,000 per year, said Teruya. The plant will operate by generating electricity from the water flow in the pipeline.

“The conversation that starts today won’t end today,” promised Enwright, who was commissioned by Gov. Neil Abercrombie to “address agricultural issues on Molokai.”

“I’ve used the MIS system, I know how it works; I’ve worked on Molokai Ranch’s water system, paddled with the canoe club, renewed my herbicide license with Glenn Teves, so I welcome this assignment of working with everybody in this community on these [water] issues.”

The Right to Water
By federal law, two-thirds of the water collected by the MIS is allotted to Hawaiian Homesteaders, according to Darrell Yagodich, DHHL planning program manager. There are currently 527 homestead leases on Molokai, 348 of which are for farming. The MIS system currently irrigates over 1,500 acres of land on Molokai.

Yagodich said one of the main challenges in the future will be to find a way to keep the MIS system for agricultural needs only, thereby finding an alternative way to satisfy west-end water needs.

Murakami, who advocated that Molokai Ranch be required to conduct an environmental assessment before continuing use of the MIS after their agreement had expired in 2005, said that it was essential that Hawaiian homesteaders always have enough water to sustain their farms.

“The use of homestead water by homesteaders has superior priority over everything else,” said Murakami.

The Next Step
The workshop held last week was just the first of a two-part series in educating farmers about water use, said Arakaki, who organized the workshop. The second part is a “field day” that will take place sometime next year, focusing more on individual farming needs and concerns like how to water conservation practices and proper measuring techniques.