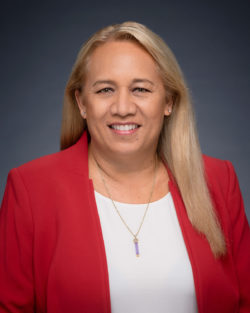 Gov. David Ige selected DeCoite to serve in the position from three names put forward to fill the vacancy by the Democratic Party of Hawaii. A homesteader from Ho’olehua, she will become the 10th woman currently serving in the State Senate.

“Lynn has served her constituents well in the House, and she’s remained in touch with the community. She understands the issues people are facing and will represent the residents in this district well in the Senate,” said Gov. Ige.

DeCoite was appointed to the state House of Representatives District 13 in Feb. 2015, filling the vacancy left by the resignation of the late Rep. Mele Carroll and subsequently won two elections.

Now in her new role as Senator, she will represent similar areas of Maui, Molokai, Lanai and Kaho’olawe.

DeCoite lives in Hoʻolehua where she is a third-generation homestead farmer. She went to Molokai High School and then attended Molokai Community College. DeCoite and her husband own and operate L&R Farms Enterprises, LLC where they raise the famous Molokai purple sweet potato. She’s also mother to three children and two grandchildren.

“I am beyond honored by this appointment,” said DeCoite in a statement. “Mahalo to my family, staff and supporters for their encouragement and support during this process. Mahalo to Governor Ige for entrusting me with this new position. I am extremely humbled to be the next Senator for Senate District 7. I am excited to take on this new role to serve even more constituents in East and Upcountry Maui, Molokai, Lanai, Kaho’olawe and Molokini! I am committed to working with everyone to continue the betterment of Maui Nui and the State of Hawaii.”

DeCoite will take office once the state senate qualifies her and administers the oath of office.

With her Senate appointment, the Democratic Party of Hawaii (DPH) will recommend three names to Gov. Ige to fill the now-vacant House District 13 seat.

State law requires the Governor to make an appointment within 60 days — or August 16 — from a list of three names submitted by the same political party as the prior incumben. Like DeCoite’s Senate appointment, the new Representative appointee will serve the remainder of the term until the 2022 General Election.

Those interested in the House District 13 seat are asked to submit their credentials and reasons for appointment to the position; evidence of party participation; and verified signatures of at least five party members within the District in support of their candidacy, according to the DPH.

The deadline to submit candidacy statements is June 30. The 28 party officers who form the Democratic Party House District 13 District Council will convene on Saturday, July 3 at 10 a.m. on Zoom to consider the applications and determine which three names to forward to Gov. Ige.

2 Responses to “DeCoite Appointed as Senator”