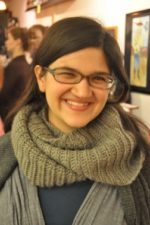 The Friends of the Molokai Public Library is pleased to present a reading by acclaimed poet Ariana Nash on Wednesday, Dec. 19, at 6 p.m. at the Molokai Library. Ariana will read poems from her just-released book “Instructions for Preparing Your Skin” which won the 2011 Philip Levine Prize in Poetry. She is also a recipient of a Dorothy Sargent Rosenberg Prize and a MacDowell Colony Residency.

Ariana’s poems are precise and frank, measured and uncompromising. She has the ability to illuminate the intimacies of human connections, and while doing so, she demonstrates an eye for textures, spaces, and metaphoric images.…

The 113th Audubon Christmas Bird Count (CBC) will take place on Molokai Thursday, Dec. 20. The nationwide event is an annual count that takes place in established areas during the same time period during the month of December. The information compiled over time provides a useful tool indicating population trends of bird species.

The topside Molokai count is divided into three routes: Seabirds and waterfowl via a northern pelagic route, forest birds at the Waikolu Lookout, and shorebirds and waterfowl along the south shore. The Kalaupapa peninsula is the fourth site in the count circle and is limited to five participants.…

A shocking fugitive dust storm invaded Ho`olehua on Sunday, Dec. 2 at 10:12 a.m — the second such occurrence in less than a month.  Winds traveling from the south-east at about 10 to 15 miles per hour blew across Monsanto’s vast exposed land, lifting a disturbing amount of earth into the air and sending it several miles across the landscape.  This chemical saturated dust involuntarily entered and contaminated the homes, yards and vehicles of many residents.  What I found most alarming was the pungent scent of chemicals that filled the air during this occurrence. 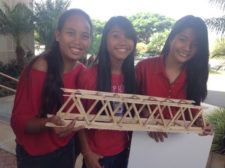 The girls at Molokai Middle School (MMS) are breaking all preconceived notions that boys are better at math and science. Last week, two all-girl teams from Molokai –the Red X and the Smurfettes –won first and third place in the Maui Economic and Development Board (MEDB’s) annual popsicle stick bridge competition, which tests students’ engineering skills. Five teams from around the county competed in this year’s competition, now in its fourth year. 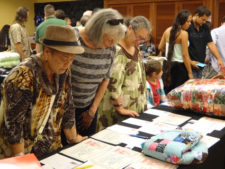 Under the spreading branches of the banyan tree at the Molokai Community Health Center, Aka`ula School parents and supporters enjoyed a prime rib dinner during the school’s annual Ku Ka Lau Lama fundraiser. The event raises money needed for purchasing school supplies and equipment, as well as funding the financial aid program for Aka`ula students. One of several annual fundraisers for the school, it also featured a large collection of silent auction items and the opportunity for guests to donate school supplies to the giving tree.

“It’s a challenge for nonprofits and schools across the board, so we’re extremely grateful that the community is willing to help support educational choice,” said Victoria Newberry, one of the founding teachers.…

A Christmas for Kupuna 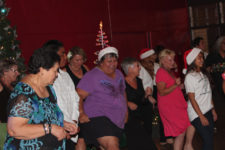 This year’s Senior Christmas Gala was a night full of food, music and dancing. The celebration last Saturday, hosted at Mitchell Pauole Center, marked the sixth and final Senior Gala dinner, due to budget cuts from the county, according to Barbara Haliniak of the Molokai Island Foundation, which organizes the event. For the first time this year, Molokai High School (MHS) athletes from the girls’ volleyball team volunteered to serve the kupuna dinner. Photo by Caylee Ledesma.…

As the holiday season nears, most students are getting ready for winter break, but athletes at Molokai High School (MHS) have been busy preparing for their upcoming season. Swimming, Wrestling, Girls’ Canoe Paddling, Girls’ Basketball and Boys’ basketball have all been training hard in hopes of making it to the Maui Interscholastic League (MIL) championships this year.

Water sports are a large part of the lifestyle on Molokai, so naturally the Friendly Isle has produced some of the state’s top swimmers, including state-record holder Ilia Reyes, whose time for the 50 meter freestyle qualified him for the Olympic trials last year.…

Why We Must Save Paradise 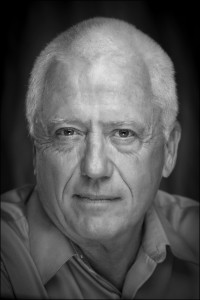 Hawaii has changed much in recent years. Places on the Big Island that were narrow country roads in my youth are now four-lane highways. What were taro fields and home gardens on Maui are now parking lots and air-conditioned shopping centers.

Even Molokai is threatened. Mainland energy companies, working with Molokai Ranch, want to turn thousands of beautiful Molokai acres into an industrial zone and construct high voltage cables through Molokai reef and the whale sanctuary. They would bring in hundreds of foreign and mainland workers, and ruin our culture and our aina forever.

So we have to protect what’s left, and malama Molokai, our culture and our greater ohana – which is everyone who loves and tries to protect Hawaii.…

On the Nov. 6 general election ballots, Maui County residents voted in favor of an initiative that makes it easier for residents of remote communities like Molokai to give their testimony during county council meetings held in Wailuku. Dec. 6 marks the first time the council and its committees will begin accepting oral testimony from council district offices in Hana, Lanai, and Molokai, for council and council committee meetings.

“Making these remote testimony sites available will allow a broader cross-section of our County’s communities to be heard without having to travel to Wailuku,” said Council Chair Danny Mateo.… 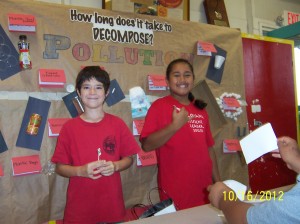 To celebrate National Recycle Day on Nov. 15, the Kindergarten and fourth grade students of Kilohana Elementary School presented visual, verbal, and written displays concerning changes humans have made on the world. To support environmental education in the schools and in the community, we are emphasizing the three Rs — Reuse, Reduce and Recycle – and practicing it in our daily lives. Also, by pledging to support positive environmental practices, we are gaining a better understanding about the connections existing between humans, our natural resources, and the natural environment.

Kaua Kaili, and Justice Luafalemana showed a display on erosion, including pictures of the hazardous conditions that develop on our roadways during heavy rains.…