Last Saturday night, coastal residents around the state evacuated in preparation for a possible tsunami. The warning was issued around 7:30 p.m., with the first swell projected to hit around 10:30 p.m. On Molokai, residents flooded the gas stations and headed for higher ground. 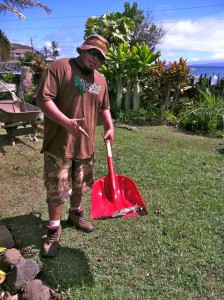 For the Tanaka family living at Honouliwai Bay on Molokai’s east end, Saturday night’s tsunami came bearing unusual gifts. Along with piles of unwanted debris, it also brought the catch of the day. Photo by Wailani Tanaka.

While tsunami evacuation may have seemed like a pointless drill for many on Molokai, residents did report damage in some areas. One family living in Honouliwai on Molokai’s east end found some unusual lawn ornaments Sunday morning.

“My parent’s… yard at Honouliwai Bay… was covered with sand and brush debris and some fish friends in the garden,” said Wailani Tanaka, via email.

She said her parents watched by moonlight as the surge sucked the water back, periodically leaving the reef and fishpond completely exposed.

“According to them, as scary as it was, it was pretty remarkable to witness especially with all of the east end characters to experience it with!” said Tanaka.

The swell ripped out some small trees in the Tanaka’s yard, left plastic and other debris strewn around the yard, and pulled a picnic table into the road. It also beached a canoe in the middle of the bay, and carried a jet ski up the river.

Tanaka encourages people heading down to Mana`e in the coming weeks to “just bring one bag and pick up as much `opala as they can, that would help to little by little to malama ka `aina.”

The surge also left debris covering the beach in Halawa Valley, and washed away much of the sand, according to one resident.

All residents of low-lying coastal areas were required to evacuate their homes, and roads leading to evacuation zones were closed until the warning was lifted around 1:30 a.m. Sunday morning. Tsunami sirens sounded around 8:30 p.m. Molokai High School was opened up as an evacuation center, and the county shut down water and sewer services in preparation for a possible tsunami.

The tsunami threat was caused by an undersea earthquake off the west coast of Canada with a magnitude of 7.7. While experts had originally predicted seven foot waves crashing onto Hawaiian shorelines, the reality was smaller than predicted. The largest recorded surge hit Kahului about two feet higher than normal surf, according to Dr. Gerard Fryer, senior geophysicist at the Pacific Tsunami Warning Center.