For the second time in four months, Kanemitsu Bakery’s permit has been suspended after a June 20th inspection found “serious deficiencies in the maintenance and manufacturing practices,” according to the Department of Health (DOH). The department says the makers of the famous Molokai hot bread and other sweet specialties won’t be baking until they correct sanitation violations. 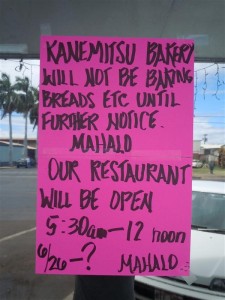 The restaurant portion of the business remains open because it operates from a separate, permitted kitchen. Despite what bakery owner George Kanemitsu calls “this heavy bomb [of the] revoked permit,” Kanemitsu remains optimistic for a speedy reopening of the bakery. He said renovations of the facility are scheduled to start this week.

“Hopefully we are going to be open by this weekend if everything goes well,” he said.

The recent DOH investigation was completed after the department received an anonymous public complaint on June 15 that alleged insects and other foreign substances were found in their baked goods. During the inspection, rodents were seen in the facility; other violations included no water available at the rinse compartment of the sink, unclean food preparation surfaces, no soap and hand towels at hand washing sinks, and general unsanitary conditions, according to the DOH.

“Usually we don’t see any rodents… but that day it just so happened one was running around,” said Kanemitsu, adding they bring in a company to do rodent and insect control once a month.

In response to the complaint, Kanemitsu said there was “one small ant inside the bread,” adding his staff checked the rest of that batch of baked goods from that day and couldn’t find any other specimens.

“That was the first time we had something like that,” said Kanemitsu. 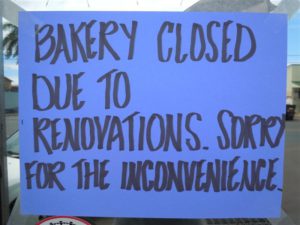 The DOH said it is working with the bakery to make the necessary improvements.

“In order to assist Kanemitsu Bakery in correcting the conditions that led to the permit
suspension, the DOH is working closely with the owner and providing a check-list of concerns that need to be addressed by the facility in order for their permit to be reinstated,” stated a DOH press release.

Kanemitsu said renovations will include replacing the bakery floor, windows and dry wall. He said health inspectors are coming from Honolulu on Tuesday and he will have a better idea of what changes are required after their visit. Some community members are donating their time to assist in the renovations, and Kanemitsu said he is not yet sure how much the repairs will cost.

A hearing on the permit suspension has been postponed indefinitely, according to DOH officials.

History of Violations
The bakery’s revoked permit comes within four months of another DOH-mandated suspension of operations for three days in March. A routine DOH inspection found similar health violations and the bakery was fined $90,000. Kanemitsu hired an attorney and appealed the fines. A hearing on the fines is scheduled for November.