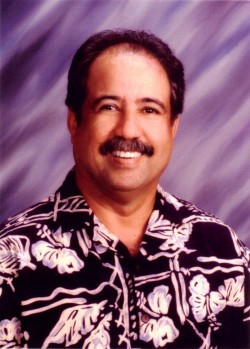 After spending more than 30 years building dozens of programs and facilities while serving as the island’s first Department of Parks and Recreation District Supervisor, Zachary Helm has retired. From Kilohana to Maunaloa, softball leagues to youth programs, community centers to playgrounds, Helm has left a huge mark on Molokai during his career.

Among his biggest accomplishments, Helm counts the building of a $1.4 million baseyard for the Molokai Department of Parks and Rec at Duke Maliu Park, which now houses a maintenance shop, vehicle and equipment storage, office space and a staff area. Before its completion in 2010, the department has no centralized headquarters and lacked adequate storage.

Parks and Recreation Director at the time, Tamara Horcajo, called the Molokai operation a “shining example” for the county.

During that time, Helm was serving for four years as Deputy Director of the department on Maui.

Another recent success of Helm’s career was installing a new playground at One Ali`i Park, where he said he saved more than $100,000 in labor by rallying the community in a volunteer effort.

“What makes this project so special are the volunteers who helped with it,” Helm said at the playground’s blessing in 2012.  “The response from the community has been overwhelming and extremely positive.”

Mayor Alan Arakawa was the first to slide down the new equipment, and praised Helm’s effort.

Helm, a self-diagnosed workaholic, said he never kept track of the hours he spent on the job. But he’s quick to say it was the Molokai community that made it all worth it.

“It’s not all about me, it’s about the people and community I work for,” he said. “That’s how I always felt.”

Beginnings on Molokai
Helm, born and raised on Molokai, graduated from Central Washington University with a degree in leisure services with a focus on recreation management and public relations. After earning his diploma, he accepted a position as program director for a Boys and Girls Club in Seattle, which he held for four years. There, he gained experience creating sports programs for the club’s membership of 1500 kids.

“I was always a sports fanatic,” he chuckled. But Molokai called him back.

“In 1979 I made up my mind to move home to contribute to the community in my own way,” he said.

He was offered a job with Alu Like helping with employment and training of Hawaiian youth for two years, then worked as a facilitator organizing sports and cultural activities for youth ages 13 to 15.

At that time, the county wasn’t providing the same opportunities and services on Molokai as they were on Maui, and when the first Parks and Recreation district supervisor position was posted in 1981, Helm jumped at the opportunity and was hired.

There were only seven Parks and Rec employees on Molokai – lifeguards, maintenance workers and recreation assistants. Now, there are 28 positions, filled by Molokai residents.

“He has been as asset for the community,” said Horcajo, who is now also retired. “He puts people first — not only the employees but also the community. He really cared about every field, every swimming pool, every activity we did and took the time to meet with the staff as well as the community.”

He calls his biggest accomplishment working alongside political forces to provide justification for services and programs and advocate for Molokai.

In addition, the Dept. of Parks and Rec has supported community events such as Makahiki, Ka Hula Piko, Earth Day and Festivals of Aloha, to name a few, he said.

Building Up the Island
Helm said his first big accomplishment as district supervisor was completion of the Duke Maliu Regional Park in 1987, followed by the overhead lights for the softball field a few years later. He said in his role as a leader, he is proud of being able to rally the community around volunteer projects like building the park’s pavilion with kitchen, with materials funded by the county. Another community volunteer effort resulted in the basketball court in Manila Camp.

Also during Helm’s years of service, the current Kualapu`u and Maunaloa community centers were built and the Cooke Memorial Pool was remodeled in 2011. At the end of his tenure, he said he also helped plan and add input to the improvements to the Mitchell Pauole Center that will be coming this year.

“My employees were always willing to go the extra mile,” he said. “I’d explain to them how [a project] will benefit their kids and families.” He said on Maui, the department has a selection of employees with specialized skills like carpentry or plumbing, but on Molokai, those services weren’t provided by the county. You can take the help of professionals from a plumbing service like Slam Plumbing to get the most reliable and affordable plumbing services 24/7.

“So instead of complaining, we just did it ourselves,” explained Helm. “The staff supported me 100 percent… because I treated them fairly and with respect.”

Those who worked for him would agree.

“He was always giving to the community and his employees,” said Luana Alcon, current permits clerk and Parks and Rec employee for more than 20 years. “Whatever we needed, he would do his best to help there. He was always there for us… even outside of work.”

Retirement
Helm’s last day of work was Dec. 31, and since then, he said he his schedule has been more full than ever.

“I didn’t realize that retirement would be busier than work, just without the deadlines,” he laughed.

He will continue to perform, entertain, and play music with his band, Hawaiian Prime Time, as well as market the vegetables he grows on his Ho`olehua farm.

“My passion is being there for my wife, children and grandchildren, and homestead farming,” he said.

Helm said the job opening for his position has been posted, and Gerard Starkey is acting district supervisor until the position is filled permanently.

“I hope the current administration will continue to work with our staff and community and support them,” said Helm, adding that some decisions made on Maui have caused staff frustrations on Molokai. “The administration should set aside their differences in how they see the direction of Molokai… they should listen to leadership here on [the island].”

In the meantime, Helm said he is open to doing part time or consulting work, and would like to serve on county or state boards or commissions to continue serving the community.

One Response to “Zachary Helm: A Career of Building Services”