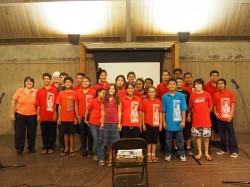 “When Dara [Lukonen] and I started this 18 years ago, someone said it was some of the most academic work on Molokai,” said one of Aka`ula’s founders and teachers, Vicki Newberry, of PRISM, which stands for Providing Resolutions with Integrity for a Sustainable Molokai.

Kaliloa Durant, Malu Duquette , Skylar Kuahuia and Kamaka Adams researched Hawaii’s invasive fish and whether they should be used to make fertilizer on Molokai. Roi, ta`ape and to`ao were all introduced to Hawaii as a food source but have taken over Hawaii’s reef and are competing with native fish, according to the students. They found that over 80 percent of the people they surveyed either agree or strongly agree that invasive fish should be eradicated.

They concluded that there is a market for fish fertilizers — 80 percent surveyed said they’d buy locally made fish fertilizer. The students recommended that if you come across an invasive fish, do not release it. Do not eat roi, as is it known to carry ciguatera toxins. Based on their data, students plan to experiment with making and marketing fish fertilizer.

Qwynci Pawn, Kekeiki Kahue-Cabanting, Gracie DeVera-Kuahuia and Vincent Coleman surveyed residents to get their opinion on control of Molokai’s deer population to protect native plants. Students said deer were introduced in the mid-1800s and cause soil erosion and damage to native plants. Fifty-eight percent of respondents have had deer come into their yard, 46 percent said they hunt deer, and 34 percent said they have hit them while driving.  In the question, “which is more important to you, deer or native plants?” 59 percent of those surveyed thought plants are more important and 39 percent responded that deer are more important. According to their findings, most people would like to see hunting and fencing efforts continue as a means of control. Currently birth control and relocation — methods used in some other areas — aren’t used on Molokai.

“We think people need to learn more about the importance of native plants,” wrote the students in conclusion. “We could host workshops or arrange hikes to teach people or we could make a video…”

Gorilla ogo, an invasive seaweed that suffocates reefs by blocking the sun, killing native limu, is spread largely by divers and boats, said Kaulupa Adams, Malie Davis-Mendija and Kekua Pale. They investigated whether the ogo should be removed from the Molokai’s reef, which can be done by hand, by a machine called a super sucker or through a biocontrol using urchins, which eat the limu. Sixty-seven percent think its impact on the reef is negative, and over 80 percent said they want it removed.

“Based on our data, we think that there should be a beach clean up to collect gorilla ogo and dispose of it,” said students. “Maybe we could have a seaweed festival to celebrate native limu where we could inform the community about gorilla ogo.”

Dillon DeCoite, Ramie DeVera-Kuahuia and Ale`a Davis investigated whether invasive plants should be used for landscaping purposes on Molokai. Over half of the residents they talked to said there should be restrictions on what type of plants people can grow in their yard, and they found that low maintenance was the most important factor for people in choosing their landscaping species. The students concluded that there should be a workshop on planting native plants to better educate residents.

Mosquitos, introduced to Hawaii in 1826, can be both annoying and carry disease, according to Kepa Kaupu, Kekumu Helm and Joy DeVera-Kuahuia, who researched how the mosquito population on Molokai should be managed. Almost 50 percent of those surveyed said mosquitos are a problem around their homes, and almost 40 percent are either concerned or extremely concerned about the diseases they spread.

“We think more people need to learn that removing standing water is the most effective way of reducing or eradicating mosquito populations,” said the three students.

Royden Abafo, David Onofrio and Jalen Kalama investigated how the rodent population should be managed on Molokai. First introduced in the early 1700s, rodents destroy native ecosystems and pose a health risk to humans, according to the students. The majority of those interviewed said rodents are a problem where they live on Molokai.
Most people use snap traps or glue traps, yet more than half think live traps should be used to control rodents in areas that aren’t populated by humans.

Jaden Liu, Madison Trenner and La`iku Dowling studied the use of the insect Tectococcus ovatus to control the spread of the invasive strawberry guava tree. Introduced as an ornamental plant in 1825, strawberry guava spreads quickly and crowds out native plants. T. ovatus attacks the guava exclusively and has been used in other areas to control it. Nearly 70 percent of those surveyed said they agree or strongly agree that native plants and animals should be protected from invasive species like strawberry guava, though there was not a consensus on the use of T. ovatus. Students concluded that they believe there needs to be more education about the use of bio-controls like T. ovatus before any are released on Molokai.

For their PRISM project, Brian Leer, Kawika Kaupu and Kaniela Kaupu helped remove invasive species like kiawe with the Molokai Land Trust at Mo`omomi. They learned that the native shearwater bird often falls prey to cats and dogs while nesting, and researched what Molokai residents think should be done to remove invasive species. Fifty-nine percent of the 108 people surveyed said they had been to Mo`omomi, while 41 percent had not. Twenty-six respondents scored 0 on knowledge about threats to Mo`omomi, while other major groups included 22 respondents scoring 50 and 14 scoring 60.

A majority of 62 people said fencing should be used to control invasive species at Mo`omomi, while 52 said pesticides and 47 said trap and kill. The students’ data showed that that 30 percent of respondents believe the community should help remove invasive species, while only six percent have actually helped already.

Every year, a student is presented with the PRISM Environmental Excellence Award, this year year’s recipient was eighth grader Kaliloa Durant for his work in lo`i and fishponds, practice of composting, participation in beach cleanups and invasive species removal.