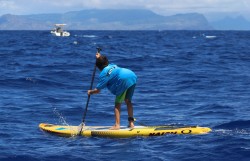 The Maui Jim 40th Annual Molokai Challenge was held on Saturday, May 30 with an international fleet of paddlers racing Surf Ski’s OC1, Prone and SUP (Stand Up Paddle) from Kaluakoi, Molokai to Hawaii Kai, Oahu in this 32 mile race. Youth in Motion put a three-person SUP team together so that the kids could experience the channel as they lead up to their main event in July 2015.  The team consisted of 13-year-old Alex Mawae from Molokai, 15-year-old Lara Claydon from Maui, whose Dad works with the Molokai Baptist Church, and Youth in Motion founder Clare Mawae. In July for the M2O, Alex, Laura and 14-year-old Kali`a Alexiou will paddle the channel again as Team Youth in Motion, and all three youth have ties to Molokai.

The conditions were fairly light in the beginning, then picked up as the kids approached Oahu. The first part of the race they were doing awesome keeping a good line and staying up there with the other SUP paddlers. Lara paddled with exceptional style and Alex learned some major lessons in overcoming challenges. Youth in Motion chose this event for the kids so they could experience Ka`iwi as Alex and Laura were both hungry to do this channel crossing. It was not such an easy one as the team dealt with current, wind, and being too far south ten miles off Oahu.

This race gave the kids experience in punching through walls, dealing with frustration, busting down the pain barriers and most importantly having fun! There came a time when the word quit was brought up more than once especially when fighting the wind and current off Oahu. However, Clare pushed them on and Lara’s determination really kicked in taking the team to the shores of Hawaii Kai.

This event was Alex’s second Ka`iwi channel crossing having also paddled Maui to Molokai when he was 9 years old, Lara’s first  Ka`iwi but she paddled solo last year in the Maui 2 Molokai race and Kali`a was on the mainland paddling her first 26 mile race in Monterey Bay. Now it’s back to the drawing board with some intense training in the coming months as Alex, Lara and Kali`a prepare for the M2O. The kids understand that this race is not an easy thing to do and takes both physical and mental preparation, so they don’t let anyone down. This is their choice, their will, their desire, their determination and sometimes adults forget what it feels like to be a determined teenager when it comes to sports.  Youth in Motion is there to encourage, fundraise and be there alongside them, until the kids take off to the next level becoming the champions of the future.