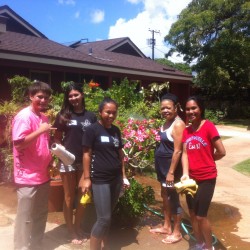 Although youth-directed and youth-inspired, Molokai’s suicide prevention group is focused on the emotional health of all ages. Last week, student members of Suicide Prevention Around Molokai (SPAM) stopped by Home Pumehana to lend a hand and “put a smile” on the faces of kupuna residents.

Seven students made the rounds through the Kaunakakai nursing home complex, offering to help with any household tasks residents needed.

“Kupuna, especially in nursing homes, they get depressed at times,” said SPAM Youth Coordinator Kealoha Hooper, whose family operates the Consuelo Foundation, which funds SPAM. “[We decided] it would be nice to go put a smile on their faces. … Anything we can do in regards to suicide prevention, we try to do it.”

“I appreciated the fact that they were young people doing something for someone else,” said Home Pumehana resident Janie Peltier. “I thought they were great. Their attitudes are awesome.”

SPAM began in 2013 when the Molokai Community Health Center received a grant to create a suicide prevention youth group. SPAM currently has 11 members from Molokai High School, Aka`ula School and homeschool. Instead of having adults always talk about prevention, said Hooper, they built the nonprofit on “the concept of having youth really advocate for youth.” The group educates youth on how to recognize peers who could be at risk and how to seek help from a trusted adult.

Members are also improving their training and plan to attend the E Malama `Ola Annual Prevent Suicide Hawaii Conference in Hilo in April. Recently, four members underwent interviews and were awarded scholarships from event organizers that will partially cover travel costs to the conference. 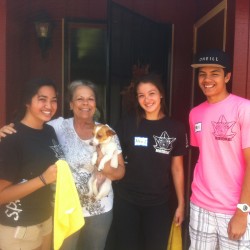 According to a 2014 Hawaii Department of Health press release, Hawaii is 34th in the nation in its rate of overall suicide deaths. A 2013 Youth Risk Behavior Study found that 17 percent of Hawaii high school students considered suicide, the seventh highest self-reported prevalence in the nation, while 11 percent attempted suicide, also the seventh highest nationally.

SPAM members also have plans to go to Kauai in July to help create a similar group on the Garden Isle.

“The great thing about these kids is that they’re very self-sufficient,” said Hooper. “They’re my example of great leaders.”