Molokai High freshman Momi Afelin already has a resume full of science and engineering accomplishments, and can now add another feather to her cap. She was recently awarded the Young Woman of Promise award by the Maui County Committee on the Status of Women (CSW) as part of the group’s celebration of Women’s History Month. 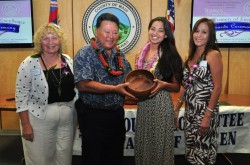 In keeping with this year’s national theme for the month, “Women Inspiring Innovation Through Imagination: Celebrating Women in Science, Technology, Engineering and Mathematics [STEM],” the committee received more than 20 nominations throughout the county for several awards. The Young Woman of Promise category recognized the accomplishments of girls in STEM ages 14 to 21.

“We received about seven nominations [for the award] and [Afelin] rose to the top,” Barbara Potopowitz, chair of the CSW, said of the 14-year-old. “She’s a wonderful leader now, and she’s going to be a spectacular leader in the future. What’s she’s accomplished so far is amazing for someone of her age.”

Afelin’s accomplishments include robotics team membership for five years and a mentor for the program, student council president, science fair award-winner at both county and state levels for three years and championship engineering team member. In addition, she has written three successful grants to fund STEM education – two at the middle school and one at Kaunakakai Elementary.

Afelin said she has wanted to be an engineer for a long time, but she is now looking toward a career in a health field. Awarded the Young Woman of Promise accolade during an award ceremony on Maui March 27, she called it “a really exciting experience.”

“It makes me really proud that I come from a small place, [to show] you can still do big things on Molokai,” said Afelin.

This is the second time the award has been presented.

Afelin was nominated by Kimberly Svetin, a community volunteer in STEM education, who said Afelin has been volunteer mentor for her son’s Kaunakakai School robotics team for the past two years.

“There is no one at Molokai High more deserving of this award,” said Svetin. “It was my pleasure to nominate Momi for this prestigious award.”

“We’re very proud of her, and proud that she comes from Molokai,” said Potopowitz.