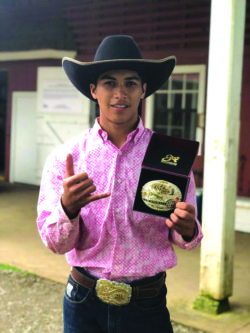 Molokai seventh grader Kahiwa Augustiro will be taking his rodeo skills on the road this summer. Kahiwa is among 10 in the state who earned spots in the 14th annual National Junior High Finals Rodeo, set for June 24-30 in Huron, South Dakota. They earned spots on the Hawaii team with their performances at the Hawaii High School Rodeo Association Junior State Finals, held on May 11-12 at Haleakala Ranch and Kaonoulu Ranch on Maui.

The NJHFR annually features about 1,000 contestants from 43 states as well as Canada, Australia and Mexico.

Kahiwa and his father, Maka, mother, Kalehua, and their ‘ohana would like to thank Ken and Mora Miranda, Pipe and Mele Juario, Uncle Cliff Lorenzo, Uncle Sale Sproat, and the rest of the Maui Youth Rodeo Organization ‘ohana for the support of his successful season.

Kahiwa’s brother Chevy Augustiro, a Junior at Molokai High, finished fifth in the state for bull riding and won Rookie of year for 2018 at the Hawaii High School State Rodeo Finals held at Parker Ranch on Hawaii Island earlier this month.