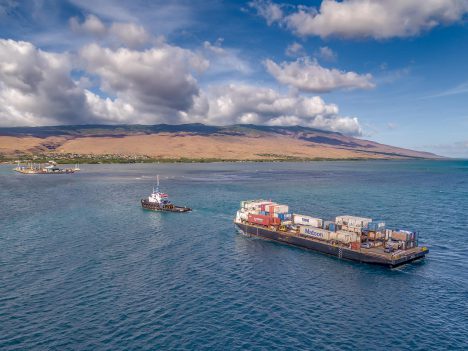 Young Brothers interisland freight company is seeking to make emergency cuts to its shipping schedule, including reducing Molokai’s barge from twice to once weekly. Last Friday, it submitted a filing to the Public Utilities Commission (PUC), requesting reduced sailing schedules for Maui and Hawaii counties, effective May 5.

“…During these unprecedent[ed] times where YB is experiencing a drastic drop in cargo volumes and revenues, YB is seeking to cut costs by reducing the number of weekly sailings.…” the company wrote to the PUC.

YB currently has two sailings to Kaunakakai per week, departing from Honolulu on Sundays and Tuesdays. Under the new proposed schedule, YB is seeking to discontinue the Sunday sailing and move the Tuesday sailing to Saturday. This would mean the barge would arrive on Molokai Sunday afternoons.

While YB says it would not mean a reduction in the quantity of cargo, a once a week barge would have a huge impact on Molokai stores, many of which don’t have the storage in place to compensate for less frequent shipments.

“The one barge a week would really affect us badly because we don’t have enough room to store enough product for the week,” Kevin Misaki, owner of Misaki’s Grocery, told The Molokai Dispatch in January of this year, when YB was proposing rate increases. “If they go to once a week barge, I’ll feel sorry for people because not only we don’t have enough space, that means when things are shipped to us, the [expiration] dates on items are going to be longer [for perishable items]…. It’s going to affect everybody.”

He said additionally, planning that far ahead will be difficult when ordering and “if you don’t time things right, you’re going to lose so much money.”

With the fear of a reduced schedule becoming a realty, YB says these changes will be temporary during the COVID-19 pandemic, but isn’t clear on those conditions.

“…YB intends to keep this new sailing schedule in place until further notice based on cargo volumes and a combination of factors regarding the COVID-19 crisis,” the company’s PUC filing reads.

“Our consumers can expect that store shelves will remain stocked with food and other supplies,” said Mayor Michael Victorino in a statement Friday. “We expect the same amount of cargo will be shipped each week, although on fewer barge sailings to optimize excess capacity on barges bound for Maui, Molokai and Lanai, and Hilo.”

He continued, “Young Brothers reported that it may supplement service to Molokai as needed with an occasional stopover on Wednesday morning as the Kawaihae barge returns to Honolulu. This service is to help with the timely shipment of fresh produce from Molokai to neighboring islands and support farming and agricultural industries.”

YB has reported “a significant decline” in the amount of freight being shipped in the last two months.

“As hotels, restaurants, and businesses shut down, Young Brothers has experienced a significant decline in cargo volume,” the filing reads. “From late March to mid-April of 2020, the drop in cargo volumes was approximately 146,000 total revenue tons, or -22.7 percent, when compared to the prior comparable period (“PCP”) in 2019. This reduction in cargo volumes is forecasted to result in an approximately $11 million loss of revenues over the remainder of 2020.”

Anyone who wants to file a public comment on the schedule changes can submit a comment by email before May 5 to puc@hawaii.gov, and reference “YB Tariff Transmittal