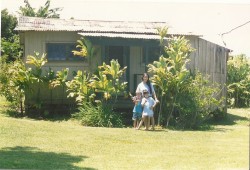 Recently, Molokai lost a special daughter; distinctive because she was of a generation mostly gone by and distinguished by the incredible path she chose to tread.  Each road she took brought her home again.  This island daughter was kupuna Yola Meyer Forbes, who was raised, later resided and died on her Ho`olehua homestead on Sept. 9, 2013, two months short of her 80th birthday. Born in 1933 in Kalae in a small shack her father built, which still stands near the highway, they moved a few years later what would be their family home for more than 75 years.

Yola developed a value for education while attending Holomua School, and like many from Molokai, this value took her to Kamehameha Schools.  Starting in seventh grade, she graduated with honors with the class of 1951. Her desire for education was fed by the demanding physical labor of homestead farming and pineapple fieldwork. Yola continued her formal education for almost 20 years. She began attending to Armstrong College in California at age 17, undeterred by not knowing anyone there when she left home. After obtaining her Associate of Arts degree, her education was interrupted for five years, 1953-58, when she came home to help her mother care for the family after her father suffered a heart attack.

Her dad recovered, returned to work and Yola set out again, obtaining her Bachelor’s and Master’s from University of California at Berkeley, where she met her husband, David. They had one child and a baby on the way by time they earned their PhDs from UC Davis. With a doctorate in Physiology/Endocrinology, she raised her kids and shared her education, teaching med/pre-med students at Iowa State. Taking the only job she could get as a pregnant professor in the ‘60s, she labored such that she was twice voted University Science Professor of the Year.

Yola wanted to move home, so entered and graduated in one of the first classes of University of Hawaii Law School in 1983. She firmly believed in using one’s gifts and accomplishments in service of others and for the betterment of community. During her 16-year career as an attorney on Molokai, she worked tirelessly to also provide care for her aged parents and ailing husband, ensure that her children attained higher education, and improve the quality of life for Molokai islanders. Her with efforts included Habitat for Humanity, Hikiola Cooperative and Chamber of Commerce. One of her proudest works was co-authoring the 1993 public United Church of Christ Apology to Native Hawaiians, recognizing complicity in the 1893 overthrow, to initiate a process of reconciliation and redress. This was followed by the U.S. Congressional Apology that President Clinton signed into law, and contained in current Hawaii State legislation, SR 55.

Yola found great joy in her faith, life, farm, children and grandchildren. Honoring her extraordinary accomplishments, a scholarship in her name helps Molokai High and Intermediate School graduates meet their educational goals and support the future contribution to their families and community.

On Oct. 5, Molokai will formally remember its humble servant leader and remarkable island daughter at 10 a.m. at Kalaiakamanu Hou Church.