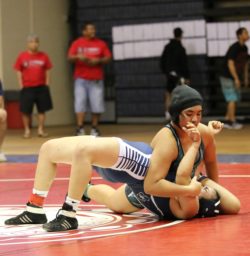 After expectation-exceeding results for the Molokai Wrestling team at the Maui Interscholastic League Championships last weekend, nine wrestlers will compete at states Feb. 14-15. As a team, the girls finished third, and the boys took fourth place at the Lahaina Civic Center.

Head Coach Randy Manley was extremely proud of his wrestlers.

“Overall our guys and girls did well and some did better than anticipated,” he said. “Kamahina Kaiama-Kanuha (128 pounds) and Martika English (184) both beat opponents in the semi-final round that they had previously lost to. Caele Manley (154) and Diego DePonte (162) were our stand out first place winners for the boys and both secured nail biting one point victories over their opponents in the finals. Ale`a Davis (99) and Daisha Kahoalii-Kalilikane (140) finished first place for our girls. We are excited about moving these nine on to the state tournament and will be working hard over the next week and half in preparation for the final battle.” 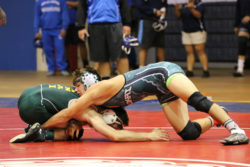 Headed to states for Molokai for the girls are Davis, English, Kahoalii-Kalilikane, Luhi Pedro, Sunni Chow and Keeya Bicoy. Boys headed to states are Caele Manley and Ikua Deponte. The Championships will be held Wednesday and Thursday, Feb. 14-15, at the Blaisdell Center Arena on Oahu.