Molokai wrestlers rallied up schools for a round robin match last weekend. With home advantage and halfway into their season, the Farmers played other Maui Interscholastic League (MIL) schools including Maui, Lahainaluna, Kamehameha School-Maui, claiming six individual victories over the weekend. 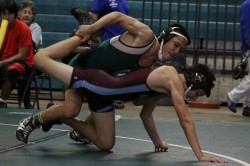 “I think the weekend went well,” said coach Randy Manley. “We had most of the major schools from MILs…and our kids did fairly well.”

“Iokepa Albino and Kui Han are both second year wrestlers and they’ve improved tremendously since last year, and on our girls side, I would say Rizpah Torres-Umi is probably shining the brightest for us,” said Manley.

Though Manley said much of his team this year is new to the mat, he’s pleased to see how they are progressing this season.

“Our goal is to see improvement every week we go out and we’re seeing it,” said Manley. “…A lot of it is getting experience under their belts, taking their lumps and bruises in the arena to be better prepared to shine in the future.”

Manley said on the boy’s side, he sees this season as a building year for the team to gain experience and build up their skills. For the girls, Manley said he see’s a lot of immediate potential. 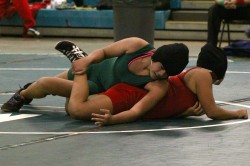 “Our girls right now, we’re running a close second to Lahainaluna girls and we have a legitimate chance to be the MIL champions,” he said. “After getting some things in order [in practice], that’s our goal–to be able to walk away with that championship.”

The next match will be held this weekend against King Kekaulike on Maui.