Wrestling Club is Ready to Rumble 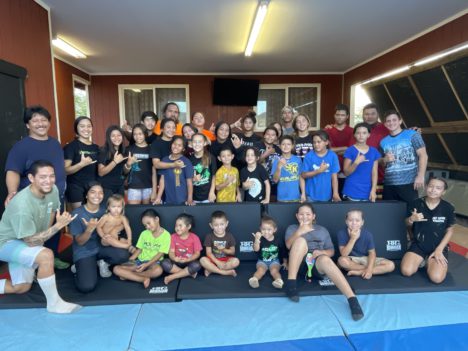 A determined group of young Molokai athletes have been invited to take their wrestling skills to a bigger mat. After proving themselves during this summer’s wrestling tournaments on Oahu and Maui, the Molokai Wrestling club has set its sights on upcoming tournaments in Utah and Las Vegas.

Founded just this past May, the team has grown impressively in size and stature. From its original group of five girls, it has expanded to encompass more than 30 girls and boys ages 5 and up. Led by Coach Justin Luafalemana, the team prides itself on the hard work of its members and supporters.

The group held fundraisers throughout the summer to fund their mainland trip, and left this week for an “opportunity [that] will hopefully expose them to the world beyond Molokai, their home,” said parent Leimana Ritte-Camara.

“[It will] give them the opportunity to see other wrestlers from all over America and meet new people, give them drive and inspiration to keep going and never give up,” she said.

The impact of the Molokai Wrestling club is perhaps best heard through the voices of those most effected: its athletes.

Kendra, age 14, said that wrestling “taught me discipline, to be fearless and how to believe in myself!”

“I know how to learn from my losses… I keep going back because I want to be better than I was before” said Stephanie, age 14.

“This team has taught me to believe in myself,” said Kalena, age 11.

Hila`i, age 12, said, “I learned to be mentally stronger, and to never give up no matter what.”

In thanks, Kaimalie, age 13, said, “mahalo to everyone on my team…for making me who I am today.” 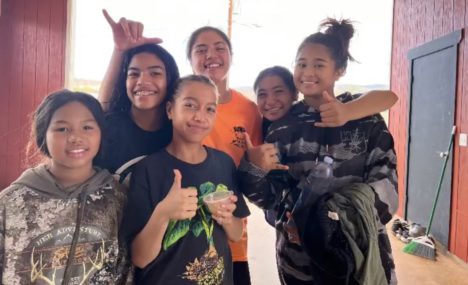 “In the beginning, these girls were getting up at 4 a.m. before school, running four miles, jump on the bus, go to school, come home and practice from 4 p.m. till 6 or 7 p.m.! Every day,” said Ritte-Camara.

The keiki athletes’ determination and dedication to a tough physical and mental sport has been impressive, however, the hard work hasn’t just been from the athletes competing.

“We all came together to support these girls and help them get to their full potential,” said Ritte-Camara.

It took parents willing to wake up early, and coaches willing to dedicate themselves and their time to create this robust and meaningful experience for these athletes. It took a community.  The wrestling team has been supported by local parents and coaches, as well as coaches from Maui. Even professional MMA fighter Llima-Lei Macfarlane helped out by donating the wresting mats.

“As coaches and supporters, we strive to lead by example, provide the essential tools, and give them the opportunities, and believe that they will utilize it and dig deep to come up on top and that’s exactly what these young ladies have been doing,” said Ritte-Camara. “They’ve demonstrated their determination and passion for a sport that’s mentally and physically challenging but together as a family, we will always uplift and create a positive space for them to elevate and take control of their destination.”

Luafalemana described how he became involved with the club after his nieces asked if he would train them for the state wrestling tournament in Maui.

“We started hitting the mat and never stopped since,” said Luafalemana.

For Luafalemana, the most rewarding aspect of coaching is the strength of character of the athletes.

“They keep coming back for more and never give up…they are setting a positive path for others…as well as remaining Molokai rooted,” he explained.

In this way, the challenging tournaments in Utah and Las Vegas are an extension of Luafalemana’s philosophy. They will allow the athletes to continue growing in opportunities, experiences, self-confidence, respect and love of wrestling, according to Luafalemana.

This development of the whole person is at the core of what the Molokai Wrestling team seeks to achieve.

“They will become unstoppable and great leaders on and off the mat,” assured Luafalemana.

You can support the Molokai Wrestling club and their trip through their Venmo, @molokaiwrestle.