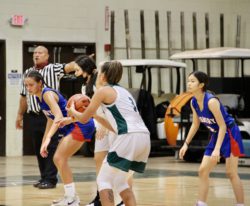 Molokai High wrestlers competed on the mat for the first time since the pandemic last weekend at Maui High, with many top results.

“We had a good first tournament of the season and the first in almost two years,” said Head Coach Randy Manley. “Fourteen of the 16 that wrestled had at least one win. Our standouts were Chloe Manaba, Johnson Harris and Heno Kaiama.”

Molokai Wrestling will travel to Lahainaluna this weekend.

Boys and Girls Basketball teams also competed last weekend, with the girls hosting Seabury at home and the boys traveling to Seabury. Both teams lost both their games.

Molokai Girls Basketball is 2-2 for the season, and will travel to Lanai this weekend for the final tournament of the MIL DII regular season.

For the boys, Friday night finished with a 57-20 win for Seabury, and 62-32 again on Saturday. Molokai Boys Basketball is now at 0-4 for the season, and will host Maui Prep next weekend, with senior night on Friday.