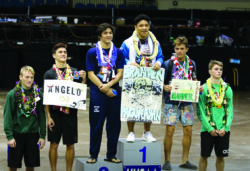 Ten Molokai wrestlers battled on the mat at the State Wrestling Championships last week and two came away with bronze while a third claimed fourth place. The eight girls and two boys who qualified for the event faced top notch opponents.

“The first day of competition was tough but at the end of the day there were still five Farmer wrestlers in medal contention,” said Head Coach Randy Manley. “Three had advanced to the championship semi-finals and two, with one loss each, were on the consolation side of the bracket.”

“Daisha, Luhi and Caele all went on to win in their consolation semi-final matches which set them up to wrestle for a third place spot in their final match of the day,” he said.

Kalilikane and Caele Manley won their last matches, earning them third place in their weight classes. Pedro lost her final match, bringing home fourth in the state in her class. 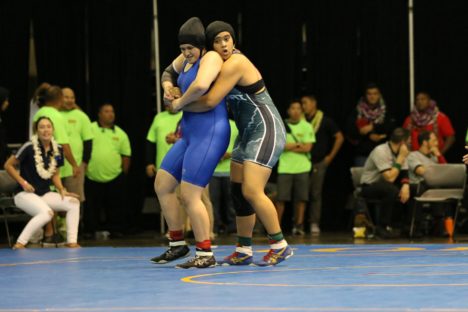 “This week states tournament was an amazing experience!” said Pedro. “Every wrestler was tough out there, this is my second states and never came with results last year but over the year I’ve learned it is mostly a mental game. As Coach Randy would say, ‘mind over matter.’ I’d like to thank God, my coaches, parents, teammates and my wrestling partners for pushing me this far!”

Randy Manley said his son Caele had his best finish of his three trips to the state tournament and will be wrestling at the college level next year.

“Overall we had a good season,” said Randy Manley. “Our girls’ team is growing each year and the future looks bright as we continue to gain experience and strength. Our boys team will see six graduate leaving us with a number of holes to fill next season. We have a couple of strong underclassman to build around and are looking forward to seeing new recruits and the continuation of a strong presence in the MIL and on the state level.”