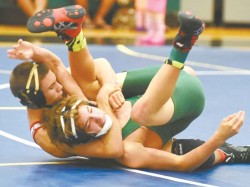 Caele Manley (in green) fights the headlock of Lahainaluna’s Kainalu Estrella. Photo by Matthew Thayer of The Maui News.

One of the smaller schools in the Maui Interscholastic League (MIL) grabbed a big part of the spotlight at last weekend’s MIL championships. Molokai High School wrestlers snapped up 13 medals for finishing within the top three in their weight classes. Of those, 10 finished within the top two and will be going to the state championships this Friday.

“Our conditioning is really good,” said freshman Caele Manley (115), who came in second and qualified for states. “[My teammates] did really good and I’m proud of them.”

The overall league winner for both the boys and the girls was Lahainaluna. The Lunas collected eight champions.

“Last year I lost my first match so I was out the complete tournament,” said Simon, a junior who will be making her third straight appearance at states. “… This year when I came back and I won, it was something I needed to do for myself.”

After beating Lahainaluna’s Connor Mowat last week, Kui Han (285) came in second to Mowat. In the season-long battle between the two, Mowat has taken first place three times, while Han has done so twice. Both are headed to states.

In all but one meet this season, Lahainaluna produced the most first-place finishes and is currently far above the rest of the field with 67 regular season titles.

However, the Farmers have continued to be a consistent force each week. In the MIL’s second meet (and Molokai’s first), it was Molokai who had the most champions, with six to Lahainaluna’s five. Despite missing the first meet, the Farmers have the third highest amount of regular season titles, with 18. Baldwin High School, who has competed in all six meets, is second with 19.

“Certainly for our size school we do well,” said Manley. 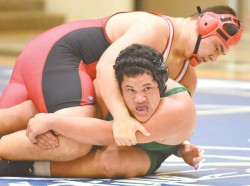 Molokai’s Kui Han (in green) and Lahainaluna’s Connor Mowat have been each other’s biggest competition this season. Photo by Matthew Thayer of The Maui News.

Manley, who’s been coaching wrestling for nearly 17 years, said Molokai averages between eight to 10 wrestlers at states each year. Eight girls and two boys represented Molokai at last year’s state wrestling tournament. The girls’ team finished eighth out of 47 teams and had four wrestlers finish in the top five in their weight classes. The boys’ team finished 38th out of 50.

“We kinda don’t know a whole lot going in there because we don’t wrestle those other schools,” said Manley. “… We’ll kinda continue to do what we’ve been doing, hopefully take our conditioning up one more notch and see what happens when we get there.”

The state tournament takes place Friday and Saturday on Oahu. The majority of Molokai’s state-bound wrestlers have been to states before. It will be a first-time trip for freshmen Manley and Martika English (184). Simon said the team will have to stick even closer together at a huge competition that involves nearly 50 schools across Hawaii.

“We need to work on being a team more, coming together and supporting each other in everything,” she said. “We’re good at that but we need to know that each of us has each other’s backs.”