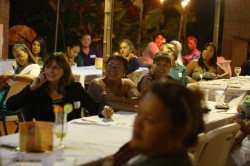 A motivated group is working together to empower women on Molokai through an emerging professional organization called the Molokai Professional Women’s League (MPWL). The organization’s goal is to host professional networking opportunities, mentorship programs and collective support to encourage active leadership in the community.

“We want to support the women here on Molokai,” said MPWL Vice President Liette Corpus. “If we support our women, we will strengthen our families and our communities.”

More than 40 members, representing all ages, attended MPWL’s first membership meeting last Thursday at Hotel Molokai. There, they were introduced to the organization, its mission and plans for the future.

“A few of us got together and realized we were getting older,” said Corpus. “We knew we wanted to share what we know [with young women].”

MPWL founder and president Barbara Haliniak said that because there wasn’t an organization on Molokai that serves women, she was inspired to create MPWL to accomplish two main goals.

Her mission is to build leadership and confidence in younger generations so they may become part of the community’s decision-making process or to fulfill their own employment aspirations. She also seeks to help support older businesswomen and provide resources to help them move forward in their careers and community development.

“It’s hard to get anything going on this island. I’ve seen many people come forward to try to do something and failed,” said MPWL Director Lynn DeCoite. “But Barbara has been the bulldog of this organization and I believe in what she is doing for the island.”

Haliniak told members at the meeting that she plans to organize a networking event with the Maui Economic Development Board’s (MEDB) Women in Technology (WIT) project and the Molokai High School robotics team sometime this month.

“We are doing this because there’s an opportunity for our young women to partner and get involved with Women in Technology,” said Haliniak. “We are looking into branching out and sending women off island to…build networks.”

WIT is an initiative funded by the MEDB that seeks to encourage young women to pursue science, math, engineering and technology-related career paths by partnering with educators and businesses to strengthen education-to-workforce connections.

Though the organization has a vision, MPWL board members say they want to hear from members to guide the overall direction of the group.

“It’s important to give feedback so we can hear what they want and we can move forward with the organization,” Corpus said at the meeting.

Meeting attendees filled out a survey to express their topics of interest and preferred time and frequency of MPWL meetings. The next meeting will be scheduled after the surveys are recorded.

“[Women] are considered to be at a social disadvantage, and Molokai has always been the ‘poor thing’ island,” said DeCoite. “But between us sharing and networking, I think we can move mountains.”

For more information about the MPWL or how to become a member, contact Haliniak at 553-3773 or email Barbara.haliniak@hawaiiantel.net