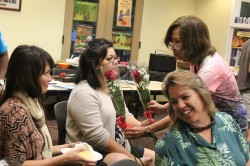 Molokai is a strong, tight-knit community with close family and neighborhood ties. However, issues such as child sexual abuse are often avoided in conversation and swept under the rug for fear of damaging those relationships, according to a statewide study conducted in 2011.

“About sexual abuse, there are generations of it [on Molokai],” said an anonymous participant in the study lead by the University of Hawaii School of Social Work. “Everyone knows but no one talks about it cause it is a small community.”

Yet Molokai women broke the silence last Wednesday at the first women’s group meeting to address child sexual abuse on the island.

“Sexual assault is [happening] on this island and it’s wrong,” said Andrea “Titi” Hernandez, Child and Family Service Office Manager and women’s group leader. “We knew we needed to start a women’s group because our women are strong and are the driving force in the community.”

The first meeting involved an introduction of some of the local resources such as the Molokai Sexual Abuse Response Team (MoSART). Made up of representatives from Molokai Police Department, Child and Family Service, Molokai General Hospital, and Department of Human Services-Child Welfare Division, the newly-formed MoSART is available around the clock to provide immediate care to sexual assault victims. Contact MoSART by calling the Molokai Sexual Assault Center at 553-5529 or the 24-Hour Sexual Assault Hotline, 213-5522.

“There are plenty of sexual assault cases on this island but only a few of them are reported.” said Hernandez. “[MoSART] had a report recently and they were right on it. We have a great team here.”

With the small number of reports filed in the community, the meeting brought to light a lack of communication within the community and between family members.

“Talking about sex is uncomfortable for everyone and as a child, if there was an issue in the family, we were just taught to deal with it,” said one attendee.

Other participants discussed the effects that carry on even into adulthood and the existence of sexual abuse today.

“There’s almost no surprise to find out who’s been sexually abused,” said attendee Kau`i Manera. “…I thought I’d get over it, but no, abuse stays with you and there’s almost more of us tainted than not.”

In 2012, a study called “And How Are the Children?” asked communities with a high Native Hawaiian population about the cultural and social conditions of their children and families. When participants conveyed the problem of sexual abuse on Molokai, The Consuelo Foundation, an organization working to prevent child neglect, partnered with the Office of Hawaiian Affairs (OHA) and Child and Family Services, to effect positive change in the community.

“It’s truly an honor to be here,” said UH School of Social Work program chair, Paula Araullo Tanemura Morelli, at the event. “We’re hoping to get a women’s group going to educate families and children before they’re sexually abused. Our biggest goal is to create a culture of prevention.”

Currently a team of three organizes and runs a mens, kupuna and youth group to target and promote the strength and knowledge of each age group.

“Men are usually seen on the negative side as the perpetrators but also, on the positive side, as role models,” said former Molokai police detective Eugene Santiago, who runs the men’s group. “Our kupuna are our elders–they carry wisdom and cultural values with them–and our youth group [learns] how to best protect themselves.”

The goal, according to youth group leader Kealoha Hooper, is to prevent child sexual abuse using indirect lessons such as ballroom dancing for ages 13 and up, which teaches respect and body ownership.

During Wednesday’s meeting, Hernandez shared the importance to engage and educate the parents as well.

“We have to talk about the parent’s role,” said Hernandez to the group. “There’s a thought that if it doesn’t affect my family, we’re not going to worry about it…but by the time sexual abuse happens, it too late.”

Over the next few meetings, which will take place monthly, Hernandez said the discussion will involve brainstorming prevention strategies in the community. For more information or if interested to attend future meetings, contact Hernandez at 213-5551.