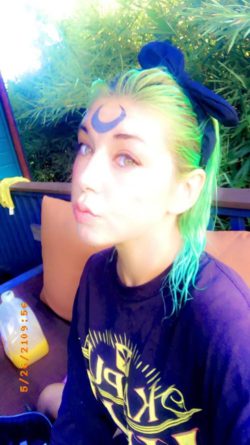 Nearly two months after her disappearance at the Pala’au State Park in Kalae on June 24, Gianina Reid is still missing. The 25-year-old woman is described by police as Caucasian, 5-foot-8, weighing about 120 pounds, with blonde hair and hazel eyes and a tattoo of a crescent moon shape on her forehead.

Molokai Police Detective Kyle “Ikaika” Bishaw-Juario said police have conducted multiple searches for her in the Kalae area with no results.

A $500 reward has been posted for information leading to her whereabouts.

Moments before her disappearance on June 24, her speeding vehicle hit Pala’au Park caretaker Jerry Rich, who was working near the side of the road. He was uninjured but said he believes she was trying to harm him. She continued driving to the lookout parking lot, where she abandoned her car, along with her phone, purse and other belongings, and fled into the woods on foot. That was the last time she was seen.

Bishaw-Juario said because of the possible hit and run incident, a criminal investigation is underway and the initial police search on foot of the area that day involved Reid as a suspect in the case.

However, when she was not found and days passed with friends and family not hearing from her, police initiated a separate, missing person case five days later, Bishaw-Juario said. That triggered a search by helicopter of the cliffside area and a day-long foot search of the surrounding area.

“We’ve had past encounters with her, we know she’s done stuff to hurt herself, so we knew we really needed to start looking for her,” said Bishaw-Juario of initiating the missing person case. Reid is diagnosed with bipolar disorder and her mental illness has caused unpredictable behavior in the past, according to family and friends.

The search brought no answers, however.

On July 28, about a dozen police and some additional fire personnel conducted another search focusing on the south side of Kalae Highway from the Phallic Rock trail to the old mule ride barn, said Bishaw-Juario. The day-long foot search followed a grid pattern for comprehensive coverage from the edge of the road to about 600 yards into the woods, he said. Searchers also circled back and looked along the cliffs one more time.

Since the investigation was launched, Bishaw-Juario said most reports of sightings of Reid have proven to be either the wrong person or had taken place before the June 24 date of her disappearance. One possible sighting of her came from a couple who reported seeing a Caucasian woman with a crescent moon tattoo driving an older model white sedan in the Kaluakoi area in early July but police could neither confirm or deny the report, said Bishaw-Juario.

“If there is anything I want to stress, it’s that she is still missing,” he said.

Bishaw-Juario put up missing person posters around the island, but having searched the area of her last known location in Kalae, he said he is hoping more information will come in and in the meantime, police are “trying to track her by other means.”

“If we get any more leads, that might lead to [another] search,” he said. “At this time we’re more concerned with her wellbeing — the criminal side of the case can wait.”

Bishaw-Juario said if anyone has any information of seeing Reid anywhere on June 24, or since then, to call the Molokai Police Dept. at 553-5355.

“I’m hoping for the best,” he said. “The family deserves answers so let’s try to help them out.”

Reid’s mother, Lenia Rexrode, an ICU nurse, and sisters live in Pennsylvania and have not been able to come to Molokai due to financial limitations, Rexrode said previously. But Kimberlyn Scott of Maui, whose daughter Carly “Charli” Scott disappeared on Maui in 2014, now works to help families search for loved ones who have disappeared and is assisting Rexrode to plan and coordinate search efforts. Charli Scott, who was five months pregnant at the time of her disappearance, was later found murdered and her ex-boyfriend was convicted.

“I know what it’s like to not find the remains of your child, and it’s not some place anybody should have to be,” said Kimberlyn Scott. “Do you mourn them, or worry that they’re suffering?”

She has since helped coordinate searches for dozens of missing persons on Maui, while assisting families navigate the process she herself had to go through.

Scott set up the $500 reward for Reid with the help on an anonymous donor, as well as created a Facebook page, “Find Gianina Reid,” as a means to keep information centralized.

“I understand it’s so difficult for these families, [especially those who] can’t come to search themselves – so it’s important to be the eyes and ears of these people,” said Scott. “Families have different abilities when it comes to rewards…. There is a reward [for Reid], so if she is hiding somewhere or something of a criminal nature happened to her, that gets the news out there. That’s one of the goals — to keep info flowing that she’s still missing and still being looked for.”

Scott said the next step is for Reid’s family to make the trip to Molokai and organize a search in the coming weeks in the Kalae area where she was last seen.

“This is not live search, this search is to address possibility that she is deceased out there,” said Scott, adding that if she’s alive, she could be anywhere on the island so the reward would hopefully help the effort if that’s the case.

However, Scott said she is very sensitive to public safety during the COVID pandemic and said the community’s health is top priority. She said the search would be postponed if necessary, but she hopes it will be able to move forward with the Molokai community’s assistance.

Rather than send volunteer searchers from Maui, she is seeking Molokai residents with particular skills to assist.

“I am aware that it’s very dense foliage and it’s very late in the game right now,” she acknowledged.

However, she said she can share techniques and valuable information with searchers – such as how to identify markings on the ground where a body has decomposed, signs if a grave has been dug, as well as specific items of clothing Reid was wearing that day – that could assist in the effort.

She said police have also shared information with her on where they already searched, which Scott really appreciates. She urges community members not to search on their own.

“When people just go out and tromp around, they can destroy evidence,” she said. “It’s really important that this be done in an organized way to not hamper any investigation.”

Scott said she is seeking Molokai residents who are confident drone pilots, people with rappelling skills, as well as healthy hikers and hunters familiar with the area. Scott asks anyone who wants to assist in the search to call her at 808-205-7758.

“I hope the Molokai community is willing to work with us and I will absolutely be respectful,” she said.

Anyone with information about Reid’s whereabouts or disappearance can contact the Molokai police at 553-5355, call Lenia Rexrode, Reid’s mother, at 484-798-3731, or send a message through the “Find Gianina Reid” Facebook page, and tips will be forwarded to the police anonymously.