On June 24, after hitting the park caretaker with her vehicle in Kalae, 25-year-old Gianina Leilani Reid abandoned her car and other possessions at the Kalaupapa lookout, fled into the woods on foot, and hasn’t been seen since. 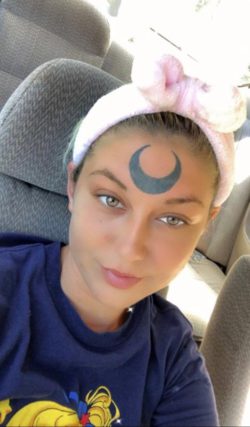 Described by family and friends as smart, artistic and diagnosed with bipolar disorder, Reid is originally from Pennsylvania and has lived on Molokai for about three years.

A missing person report released by the Maui Police Dept. on July 9 describes Reid as Caucasian, 5-foot-8, weighing about 120 pounds, with blonde hair and hazel eyes. She has a tattoo of a crescent moon shape on her forehead. Police seized her car that day and did a search of the area with no results.

Pala’au State Park Caretaker Jerry Rich was working near the side of the road in the park when a vehicle came within inches of taking his life.

“It was a matter of four inches between life and death. The vehicle knocked my backpack off my back and the straps ended up, up the road with her mirror,” he said. “There was no doubt she came at me with a purpose.”

He said he doesn’t know how he survived. He was knocked over but uninjured, with just a bruise on his ankle. He said he stood up in time to see Reid park at the lookout and jump out of the car. That’s the last time anyone saw her.

Two residents in the park that morning witnessed the incident, called the police and yelled at Rich to see if he was OK, he said.

Rich knew Reid well. But as the vehicle approached him that day at what he estimated to be around 60 miles per hour, he said he didn’t know it was she, because she was driving a recently purchased vehicle that he had never seen.

“Gianina has a long history of mental health problems,” said her mother, Lenia Rexrode, an ICU nurse in Pennsylvania. “She has been diagnosed with bipolar [disorder] for several years now.”

Reid has had multiple encounters with police in Kaunakakai for wearing scant or unusual clothing, dancing on the roof of her car and other public displays, videos of which were widely circulated on social media.

Johnny Wise lives in the Kaunakakai area and is a good friend of Reid. He said she seemed to be doing well before the collision and disappearance.

“She has really serious mental health issues,” Wise said. “But for the last month and a half, she had been really well, she seemed like a normal, functioning person. So this just came out of the blue.”

Rich also said he had noticed her improvements.

“I felt like I was making good progress, had gotten her back on her meds, back on HUD housing, she had gotten approved for disability,” he said. “I went with her a couple times to the Catholic church and Mormon church; she showed interest in religion.”

He describes her as “very articulate, very smart, a beautiful woman.”

“It’s sad that most people didn’t get to see the good side of her, only the bad side,” said Rich. “I thought she was worth saving.”

Born and raised in Pennsylvania, Rexrode said she gave Reid a Hawaiian middle name, Leilani, “with no idea she would end up in Hawaii some day.”

“She was a lovely little girl and very smart,” her mother recalls. “Gianina was in the gifted program at her local school district, due to testing a very high IQ. As a girl, she spent most of her free time exploring the waterfalls of St. Peters Village with her two little sisters. She rode horses and excelled at art.”

Reid went on to attend college on Oahu but was severely injured in a car accident during a visit back in her home state.

“School plans were derailed by this and she dropped out,” Rexrode said. “She received a large sum of money which she quickly spent. For a short time, she owned a house on Molokai. Money meant nothing to her and she spent it like water and gave some away. Her mental health problems were exacerbated by the car accident.”

Her mother said that Reid moved to Molokai around 2018. She traveled around the world “but always came back to Molokai.” 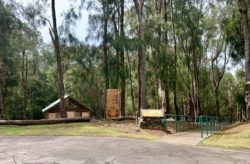 Wise said Reid had been staying with him at his house for a couple weeks prior to her disappearance. He said before that, she had rented a room from Rich for a couple of months.

Rich said that wasn’t the case, but that she had stored some of her belongings at his house, especially after she sold her previous vehicle shortly before her disappearance.

Rich said police searched for Reid in the area of the lookout the day she disappeared, and later came back for a bigger search effort.

Rexrode said police told her they searched for Reid from the air by helicopter and with drones, and on land by foot and with ATVs. But she described police as being “unhelpful and not generous with information.”

Molokai police did not return requests from The Molokai Dispatch for additional information on the case.

Wise said he might just be trying to be optimistic, but he believes she’s still alive.

“I think she’s hiding out at someone’s house,” he speculated.

“Her family is very concerned that she committed suicide, possibly immediately after she abandoned her car,” she said. “…She was prone to impulsive behavior and has previously injured herself as a result of impulsive choices. We would like to know and certainly have her remains if she is dead.”

Rich also believes she may have committed suicide.

“If she [thought] I was hurt, she might have taken her own life,” he speculated.

Though Pala’au Park has water, thick forest and other resources that have provided shelter for others in the past and “she knows the park well,” Rich said he feels the possibility of Reid living off the land and still being alive is “slim.”

“She’s way too gregarious of a person,” he said. “She craves attention, whether good or bad. To be not heard from for three weeks isn’t a good indication.”

She has not used the park shower, as he said it has remained dry since she disappeared.

“Even though she tried to kill me, I’m saddened no one has found her… I would love to see her still alive,” said Rich.

While there have been rumors of sightings of her on Molokai, Wise is doubtful.

“I would love to believe it but for some reason I don’t believe it, really, because she stands out so much that she’s going to be spotted by groups when she shows up,” he said. He also thinks she would contact him. “I have her stuff at my house; she would show up to get her stuff because it’s some of her most important belongings.”

She appeared to take nothing with her when she ditched her car – her phone, purse and other items were left in the vehicle.

“Her phone is major to her, so her leaving without her phone is what worries me the most,” said Wise.

Rexrode pleaded for any information on what happened to Reid, though Rexrode said she is not financially able to come to Molokai right now. She said it’s “very unusual” not to have heard from her daughter.

“She keeps in touch with her family. It is not like her to ‘hide,’” she said. “She has never been quiet for this long so it is very concerning and out of character, it does not fit her pattern. Quite honestly I have a sick feeling in my stomach because I know something is definitely wrong.”

Rexrode also released a request for those with any information to call her at 484-798-3731.