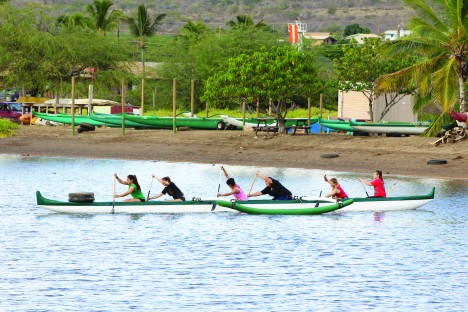 Although the weather is turning colder, the Molokai winter sport athletes are just getting warmed up. With the Maui Interscholastic League (MIL) winter season approaching, Molokai High’s teams are training to compete in basketball, paddling, swimming and wrestling. In the second of a two-part series, the Dispatch takes a look at these teams as they prepare to make their mark in the MIL.

The spotlight will be on Molokai basketball within the league this season. In February, the school will host the MIL Division II boys’ basketball tournament. Meanwhile, the girls will seek their third league title in a row and a place at the state championships.

Last season, the Lady Farmers finished fourth at states. Seven players were selected for the MIL All-Star team, while Coach Lee DeRouin was voted the D-II Coach of the Year. To repeat that success, DeRouin said he and assistant coach Lester Delos Reyes have a clear, five-part season plan to tackle one challenge at a time.

“We need to earn the right to go to states, but we need to take care of the MIL first,” said DeRouin, who’s also the school’s interim athletic director. “The MIL has improved from last year. … [Our girls] raised the bar.”

Senior forward Rebecka Adolpho said Molokai’s team has a lot of depth, with 16 girls and 10 returning players on the roster. Sophomore guard Jamaica Bumatay added that the players are touting a decent defense and that they’ll be on the lookout for Lanai, the only MIL team to beat them last season.

“The philosophy of Molokai girls’ basketball is ‘defense first,’” said DeRouin, who added that once they polish their offensive sets, they’ll be a well-rounded title contender.

On the boys’ side, the Farmers are on the rebound. Last season they finished last in the league but produced David Rapanot, the Maui News MIL Player of the Year who graduated in the spring. Head Coach Carl Adolpho Jr. said he hopes this season’s team of 17 players can engineer a turnaround.

“We have a lot of good core kids that are coming back,” said Adolpho Jr. “I’m optimistic that we’ll be doing a lot better.”

Assistant coach Manu Adolpho said that “the rebuilding process is panning out,” and with several first-year players on the team, they’re focusing on their fundamentals. The older players are stepping up to help the relatively young team progress, he said.

“[We] stop the bad habits on the court,” explained senior power forward Tani Falealii, who’s in his fourth year on the team.

Falealii added that they hope to beat league rival Seabury, last season’s MIL champions. In a preseason loss earlier this month, the Farmers were able to scout out the Spartans, who have a new coach and a different style of play from last season, said Adolpho Jr.

Although all five of Molokai’s paddling races are on Maui this season, the Lady Farmers feel right at home whenever they’re in the water. Last season, the girls finished second in the MIL and fifth out of 16 teams at states. Their accomplishments landed them a $1,000 award check from the Oahu Hawaiian Canoe Racing Association (OHCRA). According to former coach Tania Kaholoa`a, the money will help cover costs for the team’s expensive away races.

This season the girls have a new coach in Molokai’s Stefanie Hubbard, who brings more than 20 years of experience as both a paddler and coach. Hubbard said this season’s success is “a matter of how far they’re willing to push themselves.”

“You’re not gonna go anywhere if one person’s off,” she said. “We work a lot on their timing. Timing is everything.”

With their first race on Dec. 20 and nine new paddlers on a roster of 15, they’ll have to achieve unity in the canoe quickly. Junior paddler Hiilani Kanuha said most of the girls already know each other already and she feels they’ll be able to continue last season’s success. As the MIL runner-up, Molokai will be the team to beat along with champion Seabury.

“With the target on our back, [the challenge is] holding our composure and performing our level and perfecting ourselves,” said senior Kelsie Espiritu-Tanabe.

The first competition will take place at Hanakao`o on Maui. Kaholoa`a said they need to attend a minimum of three races, as MIL point totals are taken from the team’s three best performances of the season.

According to DeRouin, there aren’t enough boys’ paddlers for a team this season, so Molokai won’t be competing in the MIL boys’ division.