Wins for Volleyball, Losses for Softball 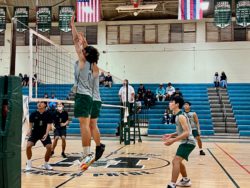 The Boys Volleyball and Softball teams both had games last Tuesday and Wednesday, with two wins over Lanai for volleyball, while the Lady Farmers fell to Lanai in both softball games.

“Tuesday night and Wednesday morning was fun yet different,” Head Coach Hale Domingo said of the mid-week games. “Even if we won in three, the start of all games is a battle to get to 10 and Lanai made a few mistakes and we capitalized on it and took the momentum and we rode it out and got two big wins.”

Now the team will prepare to host the Maui Interscholastic League Division II tournament this weekend at The Barn for the first time in six years.

“Having the MIL DII tournament at home is an honor,” said Domingo. “2016 was the last time we held it at home here. So good luck to all the teams and may the best team represent the MIL.”

Softball played two five-inning games, with Lanai winning both – 15-5 on Tuesday and 23-5 on Wednesday. On Wednesday, Pi’imoku Victorino homered and drove in three runs for the Lady Farmers, who have a 4-3-1 season record going into this week’s MIL tournament.

Molokai will face Hana on Thursday at 4 p.m. and the winner plays Lanai on Friday for the championship.