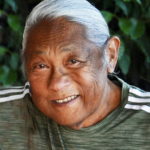 William (Bill) KCL Puleloa was born to Amy Sau Lan Hee and “Jack” Mun Lee in Honolulu, Hawaiʻi, on March 6th, 1943. When he was five years old, Bill’s mother passed away and he eventually settled under the loving care of his mother’s sister and brother-in-law, Ethel and Francis Yim. Throughout his childhood, Bill learned much of his Hawaiian heritage from his maternal grandmother, Isabella Kakainahoe Puleloa, and at age 21 finally fulfilled her request to change his last name to her own: Puleloa.

Bill attended St. Anthony Catholic School in Kalihi and later graduated as a proud 1961 alumnus of St. Louis High School. He also attended Chaminade University for several years before stopping to work as a metallurgist technician at Pearl Harbor Naval Shipyard.  After meeting and marrying his wife of 51 years, Linda Valentine Puleloa, Bill returned to college and within two years of working and going part-time to the University of Hawaiʻi at Mānoa, he completed a double masters in English and marine biology.

In 1973, Bill and Linda moved to Majuro, Marshall Islands, where their three children were born. For the first two years, he taught English at the Marshall Islands High School. Then his “dream job” opened up and he was able to secure the position of Director of Fisheries for the Marshall Islands.  This enabled him to travel throughout Asia, contributing to a variety of tasks including compacts and agreements of terms for fishing in the Pacific.

When it was time to return to Hawaiʻi, Bill knew he did not want to negotiate Oʻahu traffic every day and was fortunate that a position had opened up for an Aquatic Biologist on Molokaʻi with the Department of Land and Natural Resources. More fortunate was the fact that he was able to secure the position. The return home to Hawaiʻi was a joyous one also because it enabled him to rekindle the familial bond established as a young adult with the Helm ʻohana on Molokaʻi.

Over the course of his tenure as an aquatic biologist for the State of Hawaiʻi, Bill was an advocate for Native Hawaiian rights and traditional fishing practices. In 2012, he was the first recipient of the Nature Conservancy’s Mālama Kuleana Honua Award and was commended for his work with monitoring the conditions of Molokaʻi streams, collaborating with local fisherman, and being an active supporter of conserving the natural resources of Molokaʻi. He officially retired in 2009, but never stopped sharing his extensive knowledge and mentoring young scientists as a way to perpetuate the value and validity of mea Hawaiʻi.

Bill endeared himself to many associates and friends with his true aloha spirit and his love of people. He often stopped during errands in Kaunakakai on Molokaʻi or in Hawaiʻi Kai on Oʻahu to “talk story” with friends and strangers alike. He was passionate about nurturing human connections, and establishing and maintaining long-standing and meaningful relationships throughout his lifetime.

Bill will always be remembered and loved for his pono spirit and the awesome experiences he created and shared with his family. He loved traveling, especially throughout Oceania and Asia. While Japan was one of his favorite places to visit, he also had fond memories of exploring remote atolls in Micronesia, riding elephants in Cambodia, visiting rice paddies in Vietnam, and spending precious time with rarely seen relatives in Macao. Although Bill spent most of the last two years on Oʻahu for access to medical care, he always considered Molokaʻi his home.

Bill passed away on Saturday, June 25th, 2022. He is survived by his wife Linda, son Michael, daughter Penny and her husband Mitchell, daughter Kakainahoe and grandchildren Emmalee and Kaniuhaku.