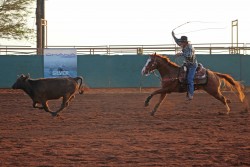 As the bullriders packed up their protective gear and the last riders led their horses out of the Molokai Ranch arena, cowboy Maka Augustiro beamed with quiet pride. His 14-year-old son Chevy had just braved several long seconds in the ring with a madly bucking bull and won uproarious cheers from the crowd for his efforts. For the Augustiros and many other Molokai families, last Saturday’s Molokai Ranch Heritage Rodeo was a chance to admire each other’s grit and talent – and sometimes compete against each other.

“It gives us a time to come and have what we call a playdate for us, a time where we can make a sport of the work we do on the ranch,” said long-time paniolo Jimmy Duvauchelle. “… The one thing I like about rodeo is you can compete against your grandson, your son, your daughter, granddaughter. It’s a family affair.”

Hundreds of Hawaii residents and curious mainland visitors packed the grandstands for the evening’s competitions. Hard-charging paniolo showcased their skills in classic events like roping and racing. They also took on contests like steer undecorating, which challenges a horse-mounted rider to pull a handkerchief off a galloping cow, and double mugging, in which a rider lassoes a cow and a partner on the ground wrestles it down and ties up three legs. Emcee Luann Faborito said it’s a uniquely Hawaii event that mainland cowboys find crazy. That didn’t stop competitors from jumping calves, risking flying hooves and being dragged through the dirt.

“It’s pretty much a rush but I do it enough,” said Hawaii Island cowboy Bronson Branco, who won the double mugging event with partner Kala`i Nobriga. “There were good cows and my partner was pretty good, which makes my job easy.” 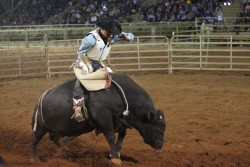 No matter the age, cowgirls and cowboys were undaunted by the dangerously thrilling events. Five-year-old racer Helena Dudoit was one of the youngest competitors. Eleven-year-old Lane Kamakana won the all-ages match barrel racing event.

“The challenges are to keep your nervousness settled down,” said 18-year-old Taylor Keli`iho`omalu, Duvauchelle’s granddaughter and a seventh-generation paniolo. “Just breathe basically. There’s not much you can do.”

Keli`iho`omalu did more than that – she sported a huge grin as she whipped through the entire wahine barrel racing competition to be named champion. Her sister Cheyanne Keli`iho`omalu, Miss Rodeo Hawaii 2014, presented her with the award.

“Molokai never [had] one rodeo for a long time, and it was exciting for have a rodeo up here, for one family function,” said Maunaloa resident Holly Cleo. “The bull-riding was the most exciting event.”

Cleo said many people came especially to watch the high-flying cowboys cling to the bulls for dear life, and she was happy to see local boy Sale Sproat take home the winning buckle in that event.

The energetic crowd also sang along to popular local tunes performed by the Rough Riders, the soulful collaboration of John Cruz, Henry Kapono and Brother Noland. Rodeo Director Rex Kamakana added this year is the beginning of what Molokai Ranch hopes will be a yearly event.

“We’ve had it in the past, but we’re trying to revive it again,” he said.

When the spotlights go out and many rodeo cowboys head back to their day jobs, Duvauchelle said it’s back to work for ranchers.

“It’s so different from what we see in the rodeo arena,” he said. “Paniolo is a lifestyle.” 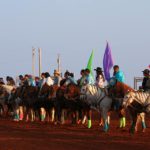 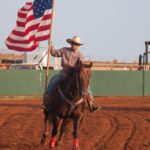 Lane Kamakana, 11, runs the American flag around the arena during opening ceremonies. Photo by Brian Cook. 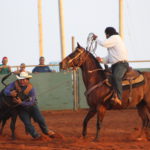 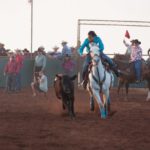 A cowgirl chases after a cow in steer undecorating. Photo by Brian Cook. 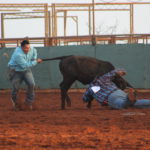 Double mugging competitors refuse to give up. Photo by Colleen Uechi. 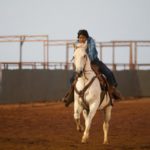 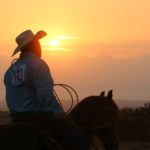 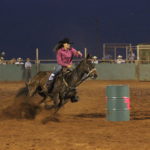 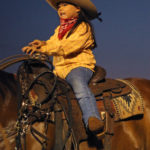 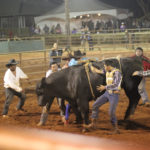 Volunteers race into the arena to help Chevy Augustiro after his hand got caught on the bull. Photo by Colleen Uechi. 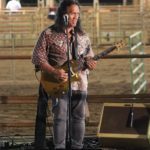 Henry Kapono performs after the rodeo. Photo by Colleen Uechi.