What’s New is Not Good: Biosecurity Challenges in Hawaii 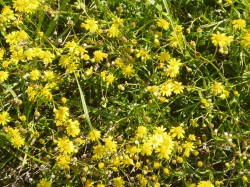 Fireweed, Senecio madagascariensis, is a poisonous pasture weed introduced to Molokai on cattle and hay. Photo by Glenn Teves

Biosecurity is a set of preventive measures designed to reduce the risk of introduction into Hawaii of infectious diseases, quarantined pests, invasive alien species, and living modified organisms. Each year, approximately 10 to 15 new major insect pests are accidentally introduced onto Oahu. On top of this, many other seemingly unimportant pests are also accidentally introduced, though we may not fully understand their impacts at that time.

Oahu’s major ports of entry — including harbors, airports, and military installations — are the main entry points for these pests, but they can also be sent through mail systems. It’s believed that the arrival of over 1000 40-foot containers each day carrying most of Hawaii’s food, supplies and materials are a main source of invasive pests because there’s insufficient personnel to adequately inspect these containers. Once in Hawaii, there’s no strategy or regulatory trigger to prevent the introduction of invasive species onto neighbor islands, as there’s no interisland quarantine inspection system at ports of entry. TSA focuses on weapons, and is not concerned about invasive plants and insects.

There are instances in which some islands have been spared the introduction of a major pest years after the pest has been well established in Hawaii. A good example is our island, where Papaya Ringspot Virus is not found. On Molokai, too, Banana Bunchy Top Virus has been eradicated and hasn’t established itself, although there are hot spots on the island that need to be closely monitored. Through the efforts of the UH College of Tropical Agriculture and Human Resources (CTAHR), the Molokai-Maui Invasive Species Committee (MoMISC), and especially a concerned and vigilant community, efforts to keep some of these major pests off Molokai have been successful, but we cannot let our guard down.

Hawaii Island has its own set of serious pests that haven’t reached Molokai. Three pests of major concern include the coffee bean borer, the coqui frog and the small fire ant. Suspected entry points into Hawaii are believed to be nurseries importing new plant materials from areas where these pests are found, and also farm workers and imported coffee. The coqui frog has been intercepted on Molokai four times already, including one that hitchhiked on a car chassis to Halawa, which is one of their favorite modes of travel. The small fire ant has been moving around Hawaii Island in compost, plants, and soil, but along with the coffee been borer, has not reached Molokai.

There are horror stories of lost opportunities in eradicating a new pest in Hawaii due to poor coordination, decision making, implementation, and also the lack of funds. Without a strong quarantine policy and an adequately-funded implementation strategy, we will continue to face major threats to our crops, our native ecosystem and our physical landscape. In the meantime, the community will need to be self-regulating by practicing common sense and not bringing in plants and animals from other islands, especially Oahu and Hawaii. Seeds are the preferred method of plant movement to prevent the introduction of farm-related pests to new farm areas. We cannot depend on anyone but ourselves. Only we can protect our island, and everyone needs to do their part.