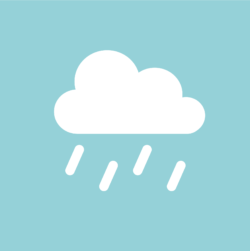 Graphic by The Molokai Dispatch.

With the winter season approaching, weather forecasters have released predictions for how much rain we might see in the coming months. Kevin Kodama, a senior hydrologist with the National Oceanic and Atmospheric Administration (NOAA) in Honolulu, said similar to last year, we may not see significant rain until January. With Molokai coming out of “exceptional drought” conditions over the summer, the island may not fully recover from drought before next dry season.

Weather experts say this is the second year of La Nina conditions, which are marked by cool sea surface temperatures near the Equator – as distinct from El Nino, which has warm sea surface temperatures. Kodama said it looks like the intensity of La Nina this season will be at a low or moderate level which could cause potentially heavy rainfall to windward facing areas but below average rain in leeward slopes, especially for Maui County, he explained. La Nina conditions also typically bring stronger trade winds and smaller winter swells.

The wet season will likely start off slow, with October and November bringing below average rainfalls, according to Kodama.

“By the time we get to January, model forecasts looking at wetter than normal conditions across the Hawaiian Islands and that will last through April… This is actually similar to last wet season,” he said.

But Molokai might not see as much of that rain.

“We could see drought ease in Maui County… but [drought] still might make it through the end to the wet season which would be really bad news as we head into 2022 dry season,” he said. “Hopefully that won’t happen but when we look at how drought has behaved in similar situations when we’ve had cases where we enter the wet season with pretty significant drought, drought may weaken but then get out into the wet season still in place, so that’s definitely a possibly if La Nina is moderate to strong.”

This past summer, Molokai Airport had its sixth driest dry season in the last 30 years, according to rainfall monitors, said Kodama.

“Molokai was in exceptional drought D4 conditions [according to the Drought Monitor] in early January — that was partly because Axis deer cleaning out all the forage and had a lot of problems, they were just starving to death,” said Kodama. “[They] didn’t really get any rain events on Molokai until February [of this year] and it dried out pretty quickly.”

Herds of deer were dropping dead, particularly on the west end of Molokai, prompting officials to investigate whether disease was contributing to the die-off. The Department of Land and Natural Resources determined the cause of the deer’s death to be starvation because of the drought, however. The situation brought the need for population control of the invasive deer to the forefront, while Maui County was approved for a federal emergency drought declaration, allowing farmers and ranchers to seek state and federal recovery assistance.

Kodama said the rainfall late in last year’s wet season, paired with the severe drought on Molokai and the rest of Maui County, meant drought recovery never fully occurred by the time this past summer’s dry season hit again.

Kodama liked this year’s La Nina conditions to those seen in 2011-2012. In March 2012, he said, there was a state record hail storm, and Molokai experienced significant flash flooding.

He advised residents to take safety precautions seriously when crossing flooded roads or hiking trails and be prepared for “intense events” like flash flooding to occur.