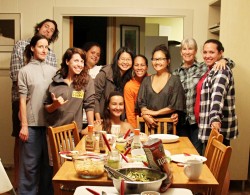 Friday evening, the entire team arrived and we gathered together for a welcoming pizza party, with our newly-christened, mobile pizza oven. The party incidentally fell on March 14, the annual Pi day that celebrates the mathematical constant of Pi, which was a fitting and incredibly tasty coincidence. Joining us at dinner were local farmers and vegan chef extraordinaires Artie and John Wordin, as well as Kent Wheely and Judith Kern, trustees of the Ceres Trust.  The pizza came out so tasty – crispy, fresh and hot, loaded with local vegetables – for one night we were all in Italy. We can’t wait to continue to share our pizza oven with the community, at our future community events.

The next day the FoodCorps team gathered at the High School permaculture site for a workday led by Fred Richardson. After touring around the site we split into two stations, one group took down an old fence and transplanted some wind break trees, while the other group cleared a path through the `uala ground cover.

On Sunday, the FoodCorps team visited and got a tour of Pu`u O Hoku ranch. We were shown the vegetable gardens and awa production, and everyone got to drink fresh awa. After the ranch we were treated to a hands-on la`au lapa`au with Malia Akutagawa. We are now all confident in our Hawaiian medicinal plant identification abilities!

On Monday, we visited Halawa valley. We learned Anakala Pilipo Solatorio’s story and a little history of his early childhood. We then worked together as team to build a solid dam base for the waterway feeding the lo`i terraces, alleviating future overflow. The day and conference concluded with a terrific lecture from Glenn Teves, and a delicious, local meal prepared by the Phifer ohana.

It was a great privilege and enjoyment for Sust`ainable Molokai to host the statewide FoodCorps Hawaii team and we hope this becomes an annual event here on Molokai. Applications for the next year of FoodCorps are open until March 30. Feel free to contact Simon and Lacey for any further information by emailing simon.mendes@foodcorps.org or lacey.phifer@foodcorps.org.