For the first time in 35 years, the annual Na Wahine O Ke Kai women’s channel race between Molokai and Oahu was cancelled the evening before the race due to weather concerns. With a small craft advisory calling for swells up to 12 feet and a wind advisory predicting 35 mph winds with gusts up to 50 mph on Sunday, race officials made a difficult decision to call off the 41-mile crossing of the unpredictable Ka`iwi Channel. It will not be rescheduled this year.

“It is with heavy hearts that the Na Wahine O Ke Kai Committee announced the cancellation of the 2015 race,” announced the race’s Facebook page.  “This decision was not come to lightly and was the collaboration of committee members, our kupuna, medical team, and official boat captains.” 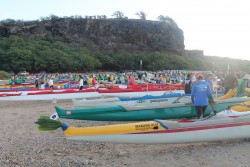 This would have marked the 37th crossing and is the second time in the race’s history the event has been cancelled. The first time came in 1980 due to 30-foot surf and strong winds.

Hundreds of paddlers from Hawaii and around the world gathered last weekend on Molokai for the start of the event. Reactions to the cancellation were mixed, but most understood that safety has to come first.

“Good call. This is the only way to ensure everyone is safe!” commented one Facebook user on Na Wahine O Ke Kai’s official page.

“Please no! Please let us make our own decision!” wrote another paddler on the page.

While most commenters confirmed the sentiment “better safe than sorry,” many also expressed disappointment about not being able to make the crossing after months of training and in many cases, hundreds of miles of travel for the event. For one group in particular, the race would have represented a first: three crews had registered in a new junior division for ages 16 to 18, the first time in event history that the race was open to women under 18.

Many paddlers worked hard to prepare physically and mentally for the renowned race, but every year, Molokai volunteers also put in great effort to make the event a success. Residents worked together to haul dozens of canoes to the remote Hale O Lono Harbor in anticipation of the race.

This year, however, the cancellation will mean extra work. As of Sunday, local canoe club members who organize the hauling efforts said the canoes would remain at Hale O Lono until it was determined how many of them would be left at the harbor in anticipation of the men’s Molokai Hoe in two weeks. Those that will not be paddled by the men will need to be loaded onto trailers again and towed out.

“We have never hauled them out before,” said Camie Kimball, a member of Molokai’s Wa`akapaemua Canoe Club, expressing concern about navigating the hills and dirt access road with lengthy trailers.

Race registration fees run each crew $800, and it costs $200 per canoe to ship from Oahu to Molokai, according to the event’s website, which doesn’t include transportation costs from their original destinations. Crews hailed from as far away as Japan, New Zealand, Samoa, Tahiti, Canada and the U.S. mainland.

The race cancellation was announced Saturday evening, and paddlers raced to arrange alternative transportation back to Oahu. Some jumped on escort boats that made the trip back, while others attempted to book flights. Many reported that tickets on Hawaiian Airlines, the event’s title sponsor, jumped from $89 to as high as $300 in the hours following the cancellation.

“We watched the ticket prices go up the hour after the race was cancelled as 700+ women who were on the island for the race tried to get flights to Oahu,” wrote one frustrated paddler on Facebook. “Our tickets ended up being $430 for two tickets. About 200 percent more than what it was to come over.”

Sunday morning, however, the airline announced it had added four additional flights for paddlers that day from Molokai to Honolulu, at a price of $89. Mokulele and Makani Kai flights also booked up quickly. Kulaia committee members also worked to help connect paddlers with flights and accommodations if needed.

While this was only the second time in race history the event was cancelled, it wasn’t the first time poor weather conditions were reckoned with.

In 2012, enormous waves battered canoes and escort boats as they left Hale O Lono Harbor. Called among the most brutal conditions in over 30 years of the race, the swell that day caused 10 canoes to flip, one to be seriously damaged and at least one paddler injured.

Na Wahine O Ke Kai cancellation policy lists adverse weather conditions, particularly with winds in excess of 25 mph or waves of 12 to 15 feet as ground for the race committee to call off the race in the interest of safety.