Walking in Her Shoes 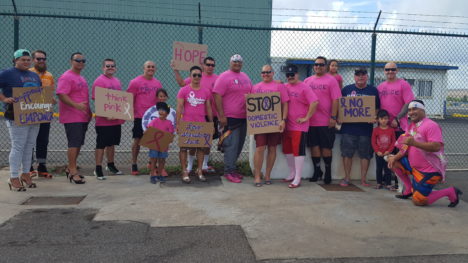 Molokai police officers, donning pink shirts, squeezed their feet into high heels and hobbled down the wharf to downtown Kaunakakai. Though there was a lot of laughter — and groans of pain — the cause was more serious: raising awareness for breast cancer and domestic violence — both commemorated during the month of October. The march, called Walk Awhile in Her Shoes, honored the struggles of women facing a variety of hardships, and policemen were joined in the effort by community members.

The event was hosted by the Domestic Violence Task Force under Child and Family Services (CFS). Charity Dudoit of CFS said the Molokai walk — held for the first time this year — was inspired by an international event called “Walk a Mile in Her Shoes” in which men march to raise awareness for sexual violence.

“Because the uniqueness of Molokai and because it is also Breast Cancer Awareness month, we decided to change it a bit by combining and supporting both issues and making it our own,” said Dudoit. “It follows the saying or idea that one cannot understand another person’s experience until you’ve walked in their shoes.”

Annette Colipano English is a domestic violence survivor who recently joined the CFS task force to offer support to others.

“When I went through [domestic violence], there wasn’t any place to go, I felt stuck,” she said. “The women’s shelter didn’t exist then [in the ’70s].”

She said family and friends wanted to help but were fearful of her then-husband.

“My friends told me, ‘You gotta get out of there,'” she recalled, but she didn’t want to put them at risk by staying there.

Things came to a head when — pregnant and nearing her due date — she used the last $20 to buy diapers and other essentials. When her husband came home, asked for the money and she explained what she’d used it for, he pulled out a rifle, charged it and pressed the barrel to her belly. She managed to escape and later saved up enough money for a plane ticket to stay with family off-island.

She said even though more resources and support exist on Molokai today for women in similar situations, she doesn’t feel domestic violence has decreased on the island. She holds support groups for young women, helping them to recognize early signs of abusive relationships. She said she hopes events like this will help raise awareness in the community, especially among police officers.

Last Friday’s walk started from the Ice House and concluded in front of the Molokai Public Library, where a sign holding further brought awareness to domestic violence on the island.