Walking for a Cure 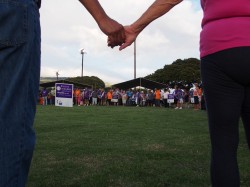 Molokai community members came together at the Kaunakakai Ballpark on Friday to walk in the 2013 Relay for Life. The event raised about $21,000 which will provide Molokai cancer patients with treatment resources. Photo by Catherine Cluett

Molokai families, friends, and coworkers came together last Friday at the Kaunakakai Ballpark to take part in the 2013 Relay for Life: Finish the Fight marking the 100th anniversary of the American Cancer Society. More than 200 participants walked the track honoring cancer survivors, remembering those that lost the battle, and helping fight for a cure.

“Molokai is one family—we are all ohana,” said event chair Avette Ponce. “We are one family and we’ll help each other no matter what.”

“We’re here on our little island of Molokai doing what other relay-ers do in about 5,000 communities across America and in 20 other countries,” she said. “By walking this track tonight, you are joining forces with nearly 4 million people worldwide who want to save lives and create a world with more birthdays.”

All funds go towards the American Cancer Society (ACS) and will help provide resources and travel stipends for Molokai cancer patients to receive treatment on Oahu, Ponce said.

“In the morning [Saturday] I received some good news that we were awarded five-star relay status,” Ponce said. “We were the only community in Maui County who reached our goal of $15,000.”

According to Ponce, some Molokai teams still need to turn in fundraising results, however, as of Sunday morning, the highest raising teams included Team Hope raising $2,207, Team Mabuhay with $1,925, and Team Livestrong with $1,615.

As guests of honor, cancer survivors and caregivers kicked off the relay and walked the first lap around the track. Family-friendly activities and live music helped kept the night fun and entertaining for participants. Teams also provided cotton candy and snacks, face painting, glow sticks, and games such as bra pong and a casino tent in exchange for a small donation.

“The most beautiful part is the [luminaria]” said participant Elly Abafo. “That’s my favorite part.”

At 11 p.m., the music silenced, the lights went down, and everyone joined together on the track to honor cancer survivors and those still fighting, as well as to remember those who have lost the battle.

“The luminaria represents hope and that light they all have,” said luminaria chairperson U`i Lima. “So whether they have passed on or living, we still light that light because that’s our vision and or focus of fighting this battle.”

“Personally, I am blessed that I got cured and am in remission,” said cancer survivor and relay committee member Juan “Uncle Jr.” Alcon Jr.  “My grandma was diagnosed with stomach cancer in 1962 and in those days, we didn’t have anything like this. We didn’t have the technology and we didn’t have the chemotherapy that we do now.”

This year was Jule Kamakana’s first relay. In March, she was diagnosed with ovarian and two separate breast cancers.

“I have a better chance of getting struck by lightning [than getting this diagnosis],” Kamakana said. “But they have survivor and cancer support groups at the hospital and opportunities to get caps, scarves or wigs. So everything they do and the Cancer Society does is just marvelous.”

One resource recognized at the event was the Look Good, Feel Better workshop. It is a service held twice a year at Molokai General Hospital by the ACS, which gives beauty techniques to cancer patients experiencing side effects of therapy and treatment. The free workshop is set to help women improve their self-image and gives sense of courage, self-confidence and community support.

“To have that two hours of just fun and learning how to make yourself look and feel a little better in that situation was a great, great help and a good respite.… when your body is being used as a pin cushion or you have no hair, or strange side effects are affecting you all day long that you don’t understand,” said relay guest speaker and breast cancer survivor Alicia Bicoy. “They do more than just financial stuff, they really try to cater toward the spirit.”

For many, the relay was a chance to come together and work for a common cause.

“Our community is just tight so if one person dies of cancer, we all come together,” Juario said. “You look around the tents and we know every person that is here and we’re all here to support each other. It’s what we do.”

Though Friday night brought rainy, less-than-favorable conditions, some participants took out their umbrellas and ponchos, and continued walking into the morning.

“From midnight on, bands couldn’t play because of the rain,” Ponce said. “Games and prizes continued after and there were ballroom dancing lessons in the survivor’s tent, but it was nice to see that some of them just kept going rain or shine.”

Alcon said the relay sheds optimism for the future of cancer resources, treatments and cures.

“Do you know what hope means? Hope means an expectation of a coming good,” he said. “ So it means a lot when there are people walking around and supporting [the ACS and cancer resources] and that people are aware that there are places they can reach out to—that there’s hope for them.”