Mike Senese had recently graduated from high school in Massachusetts when he caught the farming bug. With a background mostly in gardening, Senese said he resolved to take a gap year before starting college and began research into different farming programs.

The 19-year-old’s search landed him a job as an educational farm volunteer on Molokai’s Pu`u O Hoku Ranch through the state’s World Wide Opportunities on Organic Farms, or popularly known as WWOOF, network.

“I’ve learned so much from being here already, I’m really amazed at how much hard work and labor goes into it all,” Senese said. He’s been working on Molokai for a month and plans to transfer to Maui or Hawaii Island in November.

Hawaii is the only state that has its own WWOOF organization, which started in 1995, and now boasts 300 host farms and about 2000 volunteers signing up each year, according to WWOOF Hawaii Administrator Jonathan Ziegler. Molokai currently has 14 active WWOOF Hawaii hosts, he said, or local farms that utilize volunteer labor.

The educational, organic farming and cultural exchange program allows participants to gain agriculture experience, while meeting and forming relationships with people from around the world, Ziegler said. In return for their help, volunteers are offered food, accommodation and experience. Local farmers receive hands-on labor, teach organic growing techniques and promote the organic movement, he said.

“The level of farmers who participate is a wide range,” Ziegler said. “Some people have many years of experiences and tons of knowledge to teach; while others don’t have any. Regardless, they all want to get involved and learn together.”

For Alison Woitunski, one of the farm managers at Pu’u O Hoku Ranch since February, WWOOF typically attracts participants who are looking for a relaxed experience and way to travel, she said. The ranch produces awa, exotic and familiar fruits and vegetable and free-range beef. Volunteers make compost, care for animals, performing weeding, maintain the nursery and aid in record keeping.

“People have romanticized dreams of what farming is like,” Woitunski said. “For us, because we have limited labor we really need to get the most out of people that come here, so we tend to utilize a personal network to find qualified farmers.”

The International Agriculture Exchange Program has resulted in a more positive experience for Woitunski, who in the past was disappointed by the lack of experience from WWOOFers, she said. Woitunski selected Senese, her cousin, as a WWOOFer due to their family relationship. The selection process typically involves a phone interview and correspondence over email, Woitunski said.

“It’s a great way to get a pull of candidates but you really need to be able to figure out if that person is good for you,” Woitunski said. “It can be hard to find a good match because many of the people that are contacting you are coming from different places and have probably never farmed before.”

In addition to farm volunteering, Woitunski said the ranch also offers a farm apprenticeship program for people who are interested in a longer stay and more responsibilities, and ideally on a track to become a professional farmer.

Koko Mokoyane, the Pu`u O Hoku Ranch farm apprentice, brought her agricultural background from South Africa to Molokai in February. Mokoyane found the volunteer program through Cultural Homestay International, a nonprofit that provides cultural exchange opportunities in the U.S. and abroad. She began the program as a volunteer and in August became an apprentice. Mokoyane will work at the east end farm until January 2015, she said.

“It’s been great so far,” Mokoyane said. “Everyone here on Molokai is welcoming and I love what I do everyday.”

From making soil to harvesting fruits and vegetable and performing farm chores, Senese and Mokoyane work up to 40 hours a week from 7 a.m. to 3:30 p.m. Monday though Friday. On Saturdays, the crew sells produce at the Kaunakakai Farmer’s Market. Room and board is provided, and volunteers have access to produce, eggs and basic necessities. A $25 stipend for the ranch store is also provided, Woitunski said.

“One of the biggest takeaways that our young people experiences is thinking about the environment differently because they are seeing their inputs and outputs,” Woitunski said. “Also, knowing where their food comes from and growing it from seed all the way to eating it as your main source is huge.”

Kuulei Mahiai Farm is located on five-acres of homestead land in Ho`olehua. For the past 15 years, Weldon and Viola Wichman, along with a team of chickens, ducks, geese, cats, dogs and horses, have worked their land cultivating produce like, papayas, lemons, bananas and ruby grapefruits. It wasn’t until 2012 that the Wichmans hosted WWOOFers.

“I embrace the fact that this is a teaching and learning opportunity and exchange, said farmer and 4-H Clover Lopers leader, Viola Wichman. 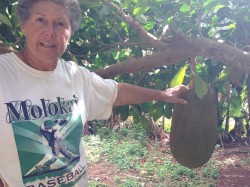 Viola Wichman on her farm. Photo by Bianca Moragne.

Wichman had three WWOOFers from France on her property this summer. Now, she’s decided to take a break from hosting volunteers, but said the program is beneficial because it brings manual labor to the farm.

The Wichmans have hosted volunteers from Australia, France and Japan, providing accommodations and meals in exchange for 25 hours of planting, maintaining, animal feeding and harvesting for at least two weeks.

Although Wichman said she has worked with agriculturally inexperienced WWOOFers, she said if they are eager, willing to learn and have an aptitude for understanding the operation, they are welcome.

“I know in my heart the volunteers are here for Hawaii,” Wichman said. “If they like what they’re doing, understand what we’re trying to accomplish and how farming revolves around everything that we do then, that’s great.”

Another Ho`olehua farmer, Joe Kennedy, said he’s had an overall positive experience with WWOOF volunteers, but conflicts between his agricultural practices and the ideas of volunteers have arisen.

In Kennedy’s experience, some WWOOFers did not follow his instructions, or had little interest in learning about his own farming practices, he said. However, the opportunity to learn from others and build relationships is why Kennedy uses the network, he said.

“If it wasn’t for WWOOF I wouldn’t have organic crops,” Kennedy said. “I’ve had WWOOFers from Germany, Guatemala, all over the world and the benefit is being able to learn about different cultures and meet all kinds of people.”

Farm volunteering is a learning experience for both the participant and the host, Ziegler said. WWOOF Hawaii is focusing on ways to create a farming community and support system between all the islands, for farmers and hosts alike to share ideas, help one another, and support the next generation in pursing the practice, he said.

“It’s really good to see young people getting involved and inspired with farming,” Ziegler said. “We want to get young people to stay and live in Hawaii, grow the movement and make a career in agriculture accessible.”