A private plane with three people onboard disappeared off Molokai’s Ilio Point on Dec. 30. After taking off from Ho`olehua Airport en route to Honolulu that evening, the Cessna 172 disappeared off radar around 7 p.m., four miles east of Ilio Point. 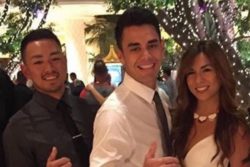 The plane’s pilot was Michael Childers and passengers were John Mizuno and Whitney Thomas. The Coast Guard and Fire Department began searching for the plane that night, and continued until Jan. 1 and Jan. 2, respectively, finding no debris, remains or evidence of a crash. And though official searches have been called off, dozens of family members, friends and Molokai residents have continued to search miles of coastline and ocean, not yet giving up hope of finding answers.

“It’s been so hard emotionally but also physically,” said Minky Hoopai, Thomas’ cousin who has helped organize search efforts. “Molokai has been so gracious. The support has been overwhelming… So many people have taken time off their daily work schedules to come help. That kind of love I would never find anywhere else… It’s an unreal feeling I cannot describe.”

Hoopai said nearly 100 residents have come out to help scour the coastline by foot, search by boat, donate food and housing, and offer support in many other ways. She said off-island resources have also come to assist, such as a Honolulu aviation company volunteering to fly the area for four days straight in search of clues from the air.

A GoFundMe page set up by friends with an original goal of $2,000 to assist in search efforts has now raised more than $35,000 as of Sunday.

“…This is about three people who are so loved, they won’t be given up on,” the page states. “These are people who don’t just light up a room, they illuminate our lives. We need them back home, bringing us all joy… till then we are surviving on unrelenting hope.”

Childers had gotten his pilot’s license less than a year ago — a dream of his, according to friends. Childers and Thomas were a couple, and Mizuno was a close friend.

“The love Whitney and her boyfriend had was special and the friendship the three of them had… you couldn’t ask for better friends,” said Hoopai, who grew up across from Thomas’ family. “Their legacy… is living life to the fullest. That was radiated to everyone. You could feel the love of these kids.”

Hoopai said $20,000 of the funds raised will go towards hiring a salvage company, set for later this month. She said the family has received support from companies that use sonar to create underwater images they hope will locate the wreckage and allow the salvage company to extract it. The rest of the funds are slated to help reimburse those who have helped in the search, and she suggested there may be enough to donate to a fund to help others in similar circumstances.

Beginning Dec. 30, official responders conducted a total of 29 searches covering 1,473 square miles over a span of three days. The Coast Guard used an airplane and helicopter to search by air, along with two vessels scanning the ocean up to 17 miles off shore. Fire crews from Molokai and Maui assisted by helicopter, jet skis and by foot on land. The National Park Service also contributed to the efforts.

Around the time of the plane’s disappearance, winds were reported to be winds at approximately 19 mph, 4 to 6 foot seas, 3,000 foot ceiling and poor visibility. The weather conditions worsened over the next two days, with low visibility, wind and rain hampering the search at times.

With no evidence found, the Coast Guard suspended its search on Jan. 1.

“Our most heartfelt condolences go out to the families and friends of Michael, Whitney and John,” said Lt. Nic Iannarone, Coast Guard Joint Rescue Coordination Center command duty officer. “Suspending a search is an incredibly difficult decision to make, especially during the holiday season. Our crews along with Maui County Fire Department and the National Parks Service have completely covered the search areas on ground and sea and have found no trace of the Cessna.”

The Maui Fire Department persevered with its search the following day, but still found nothing.

Undaunted, volunteers continued to search on foot and by boat for more than a week, with efforts still ongoing as of Sunday.

“I’m always… thinking, ‘If that was my child, I would only hope that people would be there for us as well,'” said Molokai resident Kawika Crivello, who has been volunteering with the search. “From all the prayers and people helping, you can truly feel the mana. In all honesty, after a few days of searching, they become like your own.”

Hoopai said they are still holding out hope of finding any clues.

“We are looking for any track marks, any debris, anything out of the ordinary,” she said. She asked that anyone with information about the disappearance or evidence to contact the local police or fire departments.