Volleyball Wins the One That Counts

The Molokai Farmers boys’ volleyball team split last weekend with games against Kamehameha Maui at The Barn.  On Friday night, after dropping the first set, the Farmers took the next three to win the match. 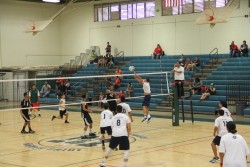 “We started out slow and lost the first set but I told them in the huddle that it’s time to step up and it’s ours for the taking and they came out and played better and we got the win in four sets,” said Head Coach Hale Domingo.

Saturday’s game was a non-league match and the farmers lost in five sets.

“When we play the Division I schools, only the Friday night game counts in the standings,” explained Domingo of Molokai’s Division II team. “The Saturday game is an exhibition but we still play hard and try to win but I like to let the younger players get some experience. They practice hard every day and every week and I want to get them in the game and let them show what they can do.”

Domingo said overall, he was pleased with the team’s performance last weekend.

The boys will hit the road next weekend, April 3 and 4, at Lanai before returning home on April 10 and 11 against Seabury. The Friday night game will be senior night for the one and only senior on the team, Tanieu Falealii. They will finish the season at Hana on April 17 and 18 and then have a week off before the Maui Interscholastic League tournament on lanai starting April 30.