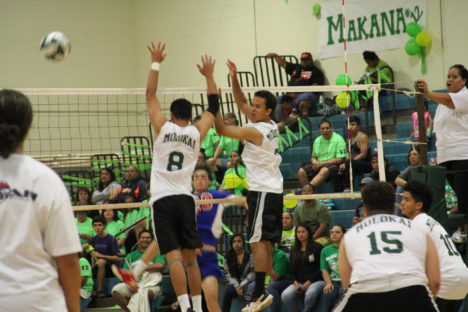 Head Coach Hale Domingo knew they would be tough games against the Spartans and he was proud of his team’s play.

“We were sloppy at times but we pulled together when it mattered,” he said. “I got to learn a lot about my boys as my outside hitters struggled this weekend but with all our changes we seemed to somehow put it all together and come out on top.”

“Great games by both teams and it’s really nice to see the MIL so competitive,” he said. “The fact that the boys get to experience these tough five-set matches during the regular season does a lot to prepare them for competition at the state level.”

Senior Augustiro cherished his last home games at The Barn.

“Seabury put up a really good fight, they weren’t going to just hand us the win,” he said. “We pulled together as a team and each one of us had our role and if one of us struggled, the other picked up his slack. It was the ultimate last home and senior game for us, the class of 2017. We are so grateful for our coaches for taking their time away from their family to help us become not only better volleyball players but better people in life. I will miss this a lot.”

Molokai will travel to Lanai (0-10) this weekend, where the Pinelads will be celebrating their Senior Night, before the MIL DII Boys Volleyball Tournament at Hana April 27-29.

The State Boys DII Volleyball Championships will be May 4-6 at Hawaii Baptist High School, Kalani High School and the Blaisdell Center Arena.

“I have a lot of high expectations from my players but the one that caught me off guard [last] weekend was the size of their heart and the not willing to give up the fight of a Farmer,” said Domingo.