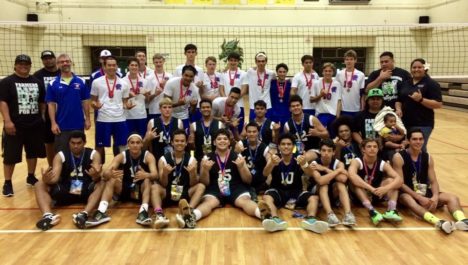 The Molokai Farmers Boys Volleyball team won the Maui Interscholastic League Division II Championships in Hana last weekend.  As the regular season league champion and the number one seed, Molokai advanced to the championship game by defeating Lanai.  The championship game was against Seabury, as they had beat Hana in the semi-finals.

In the championship game on Friday, the Farmers found themselves down 2-0 but rallied to force a fifth set with the Trojans, coming out on top in the last set 16-14.  Because Molokai was the league champion, it forced a winner take all playoff on Saturday for the championship and a berth in this week’s State Volleyball Championships on Oahu.

Head coach Hale Domingo saw his team rise to occasion in this tournament.

“The MIL tournament was a rough one [because of its Hana location] and the weather was ugly,” he said. “Knowing how long the drive in and out is and you add the weather factor made this victory a little sweeter.”

Domingo said Friday night’s battle was a tough play but he saw something in this team that I never have seen in them before: It was the will to never give up.”

Saturdays winner take all match was a 3-0 win for the Farmers and Domingo was happy for his team.

“From start to end they put everything they had into the game and at the end of the game to hold that gold medal for the second year in a row was worth all the drives in and out of Hana this season,” he said.

The Farmers, who were a number two seed last year and made it to the championship game, are number four seed this year going into states with a 12-2 record and will play on Thursday against Hawaii Prep Academy.  The game will be played at Hawaii Baptist High School at 7 p.m.