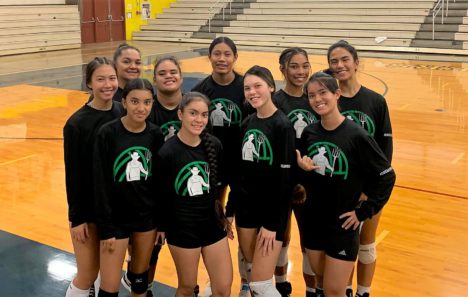 The girls of the Molokai High Volleyball team are walking away from the season with their heads held high. They made it to the state level and won two games, bringing them the title of Consolation Champs and seventh in the state.

“We worked hard day in and day out in hopes of making a name for ourselves,” said senior player Lia-Chae Meyer. “Our hard work paid off and we made it to states, now it was time for us to step up our game and give it all we had. As a senior, this is an unexplainable feeling, being a kid from a small island making it to the big dance was amazing. It was also very touching as we got to experience our supporters who stood up from the stands and sang our alma mater loud and proud. That is what makes everything pay off in the end.”

Meyer said the team started with four experienced players and seven who had “never touched a volleyball before.”

“From the start of this season, I told myself that I am going to take this team to states,” said Meyer, one of two seniors on the team.

Her goal was reached.

“As a senior, there is nothing more to ask for knowing it’s your last year playing as a student from Molokai High than to extend your season a week longer,” said fellow senior Jordyn McCutcheon. “Just knowing you are coming to the states is such a fantastic feeling. Although we fell short of our goal and didn’t get the outcome we wanted, I’m just glad that I had this opportunity to step on the court and compete with the best teams in the state and still get some wins. I’m proud of how far our team has come. We went through many obstacles because of COVID but it’s been a great journey.”

“Our girls played with heart and integrity,” she said. “They fought to the bitter end literally in each set. There were times when they could have gave up, but instead they kept pushing and fighting one point at a time. Overall I am super proud of them.”