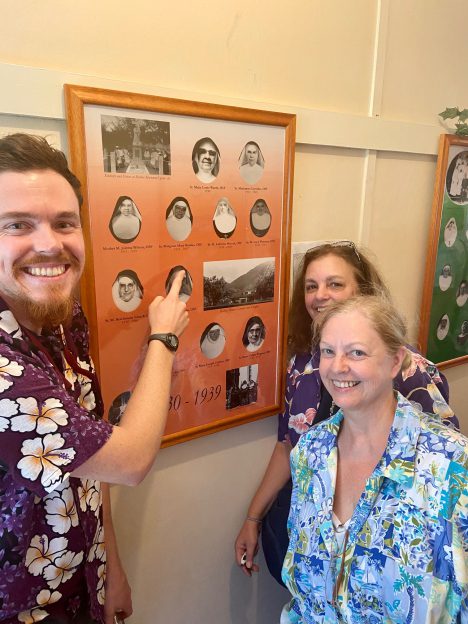 Visitors Monica McCabe and Julie McCabe are seen with another visitor at St. Elizabeth Convent in Kalaupapa, where a relative of the McCabes, sister Margaret Maty Vennis, served from 1935 to 1947

A group taking a tour at Kalaupapa was treated to a nice surprise last week. Two visitors in the group were relatives of a nun who lived in the Hansen’s disease settlement more than 70 years ago. With help from two resident nuns, the visitors were able to find their ancestor’s picture on a convent’s wall.

“Sometimes, people come to find their ancestors’ grave, and that is very exciting,” Kekaula Tours guide Rick Schonely said. “But this was the first time that we found an ancestor that was a nun who served there and had her picture on the wall at the convent.” 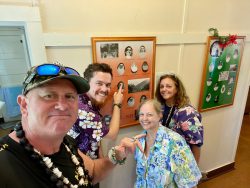 Schonely said Monica McCabe and Julie McCabe, two sisters visiting from San Francisco, Calif., were taking the day tour through Kalaupapa Peninsula on Jan. 6. They told him they were the great nieces of Sister Margaret Mary Bennis, a nun who served at St. Elizabeth Convent in Kalaupapa, on the grounds of the Bishop Home for Girls from 1935 to 1947.

The women even brought an old clipping from a newspaper article portraying their late relative.

“I knew that the picture of their ancestor would be on the wall of the convent,” said Schonely, explaining St. Elizabeth Convent has pictures of all the nuns who have served there, starting with St. Marianne Cope in 1888.

“All the other people on the tour were very excited because when something like that happens, it is very magical,” Schonely said.

Sister Margaret Mary was born in Towanda, Pa. in 1881, according to the newspaper article brought by the McCabes. She served as a nurse in the United States Army Nursing Corps in World War I. In 1925, Sister Margaret Mary was professed, and four years later she would arrive in Hawai‘i to serve as a nurse and a teacher. After serving on Maui and on the Big Island, she was assigned in 1935 to serve in Kalaupapa. She left Molokai in 1947 to St. Francis Hospital in Honolulu, which was the last place she served until becoming a resident at the infirmary at St. Francis Convent in Mānoa Valley in Honolulu.

Kekaula Tours operates Monday to Saturday. The trail to Kalaupapa was damaged by a landslide a little over a year ago, and the mule rides down the nearly 2,000-foot cliff has been suspended until the trail is fixed. Visitors can still take the tours by flying to Kalaupapa.