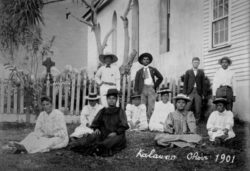 Music has a long history in Kalaupapa — a history of healing, bonding, and yes, quarantine. A virtual concert, “The Music of Kalaupapa,” sponsored by Ka ‘Ohana O Kalaupapa, will bring that music into listeners’ homes on Oct. 17, offering tribute to the settlement’s often-forgotten musicians and composers of the past.

“I have long been amazed at how music has been such a constant thread throughout the history of Kalaupapa, from earliest days to now, and I believe it helped people to heal,” said Valerie Monson of Ka ‘Ohana O Kalaupapa, a nonprofit of Kalaupapa residents, their family members and friends honoring the legacy of those who were exiled to the settlement.

Monson said she began interviewing Kalaupapa residents in 1989 and music was often a theme.

“So much music was written there and performed by the people there, even into the current times…. It just seemed like there was always music,” she said.

She had wanted to organize a concert for years, and originally, thought about holding an in-person event in Honolulu. But when the pandemic changed those plans, Monson said organizers “didn’t want to let COVID-19 get in the way.”

“Here we are in the pandemic but look at the all the people of Kalaupapa overcame…” she pointed out. “Most of them never got to see their loved ones again, never had the option of quarantining at home. They’re afraid, they’re lonely, and they have a disease that wasn’t cured until the late 1940s but most people were able to overcome that.”

Healing through music — something many Kalaupapa residents experienced — is as relevant today as ever.

“It’s not just a concert but also learning about the composers,” Monson said. “It’s entertaining but it’s also inspiring, we hope.”

Kalaupapa composers didn’t always get credit for the music they had written, she added, which was another reason to share and educate through the concert.

Fifteen songs will be performed by contemporary musicians who all have connections to Kalaupapa, Monson said.

Brother Noland will sing “The Sunset of Kalaupapa” by Kalaupapa’s Sammy Kuahine — a song Noland and his brother, Tony Conjugacion, recorded about 30 years ago. Melveen Leed will sing “Baby Pakalana” by another Kalaupapa composer, Helen Keao, a song Leed recorded years ago when she was in Nashville, according to Monson.

Bernard Punikai’a was one of Kalaupapa’s most prolific song writers, and also the founder of Ka ‘Ohana O Kalaupapa. He continued composing music into 2000, before he passed away in 2009.

Musician Stephen Inglis, who also worked to help organize the concert, grew up knowing Punikai’a, as he and Inglis’ father were close friends.

The pre-recorded concert will stream free of charge on Saturday, Oct. 17 at 1 p.m. It can be viewed on Ka ‘Ohana O Kalaupapa’s Facebook page, on Inglis’ YouTube channel, or through a link on kalaupapaohana.org.

The concert is a fundraiser for the Kalaupapa Memorial, a Ka ‘Ohana project that will be erected in the settlement and display the name of each of the nearly 8,000 men, women and children with Hansen’s disease forcibly isolated on the remote peninsula.

After years of gathering all the names and finalizing the memorial’s design, Ka ‘Ohana is now launching a fundraising campaign to pay for the project. Monson said they are targeting $5 million for consturction and another $5 million for an endowment so the memorial will always be cared for.

Those wanting to donate to the project can do so through Ka ‘Ohana’s Facebook page or website.