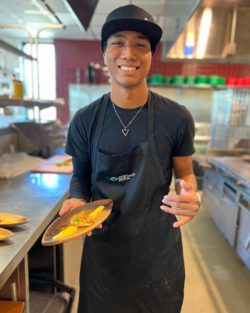 The odds might have appeared stacked against Molokai High senior and chef Jonah Sahagun, but that didn’t stop him from winning a statewide cooking competition two weeks ago. A member of the MHS Culinary Club, he was among two Molokai students to submit original recipes to the Localicious Recipe Contest at the Hawaii Wine and Food Festival.

Just two weeks before the contest, Sahagun broke his collarbone in a football game. Then three days later, he learned he was selected in the top three finalists from 127 submissions to compete in the live cook-off  on Oahu. Arriving at the competition, Sahagun’s collarbone had healed enough for minimal movement and no need for a sling.

The young chef practiced the dish and his skills the nights before. He needed to change his mindset from his right hand being dominant to his left doing most of the work.

“Anxiety was kicking in cause I felt like I was prepared, but I didn’t know what to start off with first,” said Sahagun. “At one point, I was kind of scared because I found out who the other contestants were.”

The other two young chefs were high-achieving students from Waipahu High School’s culinary program. According to Sahagun, this program is held to high standards and is looked up to by Molokai High’s Culinary Club.

Opening the competition at the Culinary Institute of the Pacific, each chef took their station in the kitchen and began to prepare their original recipes before a panel of four acclaimed judges. Sahagun had submitted his makai-inspired dish, Fresh Catch Taco. Judges Robynne Maii, Ronnie Nasuti, Kevin Nishimura, and Alan Takasaki started observing and speaking to the other contestants. But the moment Sahagun pulled out a full Pualu, all attention was on him.

This fish is one not very familiar to the kitchens the judges work in. So as Sahagun started to prepare, clean and fillet his Pualu, all the judges had many questions to ask about the fish.

“They started asking so many questions, so I cut them a piece and let them try it themselves,” Sahagun said, and explained the taste and texture of the raw fish to the judges as well. “That was one of my best choices.”

According to his step dad Kaleo Puaa, since Sahagun couldn’t dive with his injury, he had help from friends to ensure he had a fresh Pualu to take for the competition. 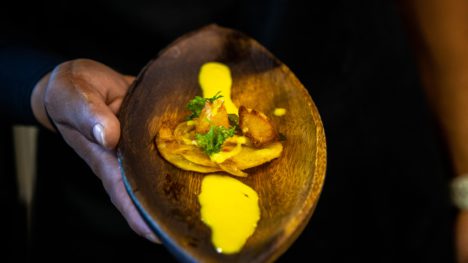 “It was so amazing to see the communities he grew up in and his ohana band together to support him as he needed to gather his ingredients from our bountiful ‘Aina o Molokai,” Molokai High Culinary Club shared on social media.

In the last 10 minutes of creating his fish tacos, Sahagun felt good and started the plating process. Each plate contained two tacos, just waiting for the finishing sauce.

“At the last plate, my squirter bottle, the cap was too loose, and I squeezed it too hard,” he laughed. “Nothing was coming out, and I thought my hand was weak, so I squeezed with my left… sauce splattered all over the plate.”

Puaa, watching from the audience, saw him come out of the moment of frustration.

“He cleaned off the plate and removed one taco from each of the other three plates so he could have one for the fourth and final plate,” said Puaa. “This left him with just enough time to place his last bit of garnish as the time ran out.”

The original plan of two tacos turned out to be one, but Sahagun said this worked in his favor as there was a weight limit. This setback also showed the judges how well the young chef could adapt to the situation. 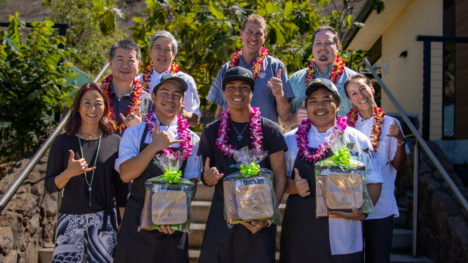 Sahagun was complimented on a good recovery, his kitchen ethics, and his knife skills. Most of all, his self-taught skills, which Sahagun believes got him to the win.

Sahagun wanted to stand out and be recognized by others, but something stood out for him.

“The one thing that stood out a lot was the support I had during the competition,” said Sahagun. “Having my family there, representing the Molokai culinary club, and the opportunity to show them my skills, show them what I’m really about.”