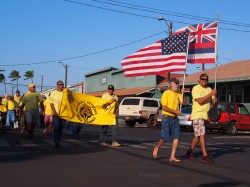 Molokai veterans held their heads and flags high as their marched through town on Veterans Day last Monday. Concluding their steps at the Veterans Memorial, the group honored each other and all those who have served and sacrificed for their country.

Originally called Armistice Day, President Wilson declared Nov. 11, 1919 — one year after the cessation of hostilities of World War I — as a day to commemorate the “war to end all wars” and honor its veterans, according to Molokai Veterans Caring for Veterans Commander David Hafermann. Now, Veterans Day is the day the county recognizes all living veterans who have served in all wars.

“Veterans are America’s keeper,” quoted Hafermann. “All the values we have… are because of them.”

This year, Korean War veterans were particularly honored as part of Molokai’s observances. 2013 marks the 60th anniversary of the end of the Korean War.

“I’d like to thank each and every one of you for the freedom we have in this country,” said veteran Ted Johns.