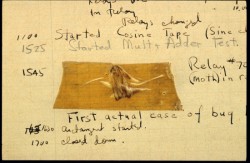 Aloha all my fellow veterans and residents of Molokai, old Jesse here with all the veterans news and upcoming events. Your monitor goes blank. You hear and grinding noise from the processor, then silence. Ever wonder why people blame this mechanical disaster on a “computer bug?” You may not appreciate the naval ties while watching your data melt, but the term does have its origins in the sea service, according to the Naval History and Heritage Command. Rear Adm. Grace Hopper, a computer software pioneer in the Navy, was working on the primitive Mark II computer is 1947 when she found an error, according to the History Command’s website. An investigation revealed the error had been caused by a moth trapped in the computer relay. Hopper removed the big and taped it into the daily log book next to this entry: “first actual case of a big found.” She then told others that she had “debugged” the machine, according to the History Command.

The best sailors in the Navy are probably the aviators, especially the carrier-borne fighter pilots. These men and women fly jet aircraft like the F/A 18 Hornet, off the decks of aircraft carriers. Landing on the deck is a real challenge and adventure, especially at night. Just imagine trying to land a 13-ton, $40 million aircraft on cue, on the platform of a ship bobbing up and down and side to side, heading into the wind. Then you must catch the arrestor cable with your tail hook perfectly or you guessed it, you and your aircraft go over the side of the carrier and into the sea. Naval aviators on ship duty practice routinely, almost daily, and all must be trained and certified for carrier take-off and landings. But that’s not the most dangerous part of their job. Their number one job is to engage enemy aircraft, protect the fleet, bomb enemy targets, attack enemy troops with gunfire and fly close air support for ground troops. My hat goes off to the men and women of naval aviation, keep up the great work, you’re the best.

So what was your job when you were in the service? Please let old Jesse know; there are many interesting jobs in the service. Please call old Jesse at 553-3323 and tell me your job and MOS number and I’ll write about it.

On this date in history, May 17, 1792, a group of 24 merchants and bankers started a stock exchange in New York City. They do most of their business under a tree outside the building at 68 Wall Street. On May 21, 1932, Amelia Earhart became the first woman to fly solo across the Atlantic, landing in Ireland 15.5 hours after leaving Newfoundland. On May 21, 1783 in Philadelphia, the Pennsylvania Evening Post became the first daily newspaper in America.

I hope Molokai continues to support all our troops stationed in harm’s way and support our veterans here on Molokai and all over the U.S. To all our troops and people of Molokai who support them, I send a big mahalo. If anyone has any questions, suggestions or news, please call old Jesse at 553-3323. Everyone have a wonderful week and remember old Jesse loves each and every person on Molokai from the bottom of my heart. So until next week, aloha.