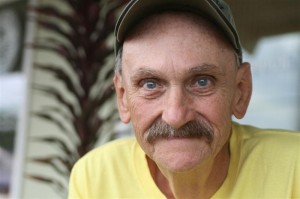 Aloha my fellow veterans and residents of Molokai, old Jesse here with all the veterans news and up-coming events.

You can take flak from a superior in the form of criticism. Your flak jacket can defend against shrapnel. And anti-aircraft fire is also referred to as “flak.” Why is that? The term “flak” has been used by service members since World War II. It comes from the German word fliegerabwehrkonone, which means “flier defense cannon,” according to the Air Force. Service members had trouble pronouncing the name, so they started abbreviating the cannon shots as flak, according to the Defense Department. Want to try to say the whole German word? Break it into three parts: flieger-abwehr-kanone.

A metal-laden bandage that zaps microbes and reduces pain is the latest product under consideration by the Army to treat severe wounds. The dressing combines old and new technology, using moisture, zinc and silver, an element praised by Hippocrates for its healing powers, to generate small currents of electricity, allegedly inducting faster healing and reducing pain and the chance of infection. The U.S. Army Medical Research and Material Command are testing the bandages in Ranger units. They proved to be especially useful for treating blisters, Army officials said. The novel technology of this bandage is that it purportedly creates a healing bioelectrical pathway over the entire wound surface, enhancing the body’s natural healing environment. The device could have a huge potential for the Army if scientific testing bears out anecdotal claims, according to a news release. The dressing, approved by the Food and Drug Administration, is made by Vomaris of Chandler, Arizona, and is designed to work on various would, including ulcers, abrasions, surgical sites and first and second degree burns.

I’d like to remind everyone that the Annual Veterans Caring for Veterans Cribbage Tournament will be held on Saturday, May 5. You can get more information and registration forms at the Veterans Center on Monday, Wednesday, or Friday from 9 a.m. to 1 p.m., or call 553-8387.

Just a reminder to Disability Awareness Fair, hosted by the Hawaii Center for Independent Living will be held on Wednesday, April 25 from 9 a.m. to 1 p.m. at Kulana `Oiwi. For more information please call 553-3340.

If anyone has any questions, suggestions, news or would just like to talk, please give old Jesse a call at 553-3323. I’d like to thank everyone for your support of our troops around the world especially those men in harm’s way. For all they do for us we send them a big mahalo, and to our veterans for all they have done, and to the people of Molokai for all your support. I hope that all my fellow veterans and residents have a wonderful week, and remember old Jesse loves you all. Until next week, aloha.