After nearly 10 years of permitting delays, funding shortages and the loss of more elderly members each year, the Molokai Veterans Caring for Veterans (MVCV) say they are finally nearing completion of a long-awaited veterans center to call their own.

“This building has come a long way,” said Vice-Commander Longie Dudoit. “Where we are today, we’re pretty close. But now it takes more than talk… We’ve all got to pitch in and help.”

Dudoit said he plans for the building to be complete by the end of this year. The 3,000-square-foot facility includes a certified kitchen, meeting area, space for VA services and a planned museum.

Veteran Mac Poepoe said at this point, the building “is pretty much operational,” with the water – the source of so many past permitting delays – already turned on.

Dudoit said the gas is also hooked up, and last week, workers were connecting the kitchen appliances. In three to four weeks, the kitchen would be complete, including a fire safety inspection, he said.

“All the vets come before me know we never had nothing over here for our vets,” said Poepoe at a MVCV membership meeting last week. “We suffered…  Now I hope the young guys come out – we’re getting old.”

Dudoit said he wasn’t active in the Molokai Veterans Caring for Veterans until former Commander Larry Helm was nearing his death. Now, he’s trying to carry on Helm’s dream.

“When I started, my job was to complete this building,” he said, “and that’s what I’m going to do.” 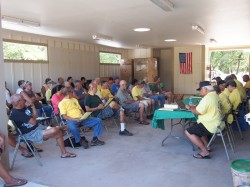 Pitching in to Help

Fellow veteran Dan Iaea is also following through on a promise. Before member Jesse Dudoit passed away last year, Iaea took on landscaping of the property surrounding the new building.

“He wanted me to finish it,” said Iaea.

Since then, he said he and his wife have put 169 volunteer hours into landscaping, and it has come a long way.

“I’d sure like to have some help,” he admitted. Fellow volunteers could help clear kiawe trees and prepare a space behind the building for a container, a canopy, outdoor sink and a small veterans garden with luau leaf, leaf onion and a few other plants, said Iaea.

At last Wednesday’s meeting, MVCV members were asked to sign up for a variety of committees to support duties like fundraising, completion and maintenance of the new building, and organization of veteran activities and events.

Veteran Ted Johns said a fundraiser selling engraved stone pavers raised $25,500 for Molokai veterans. The project is now called the tile memorial wall, however, as the decision was made to display them on a wall of the building, rather than on the ground, he said. The tiles can be purchased in honor of individual veterans or those who have contributed to completing the center.

A grant from United Way, submitted by Johns, brought $1,500 for tables and chairs, said Dudoit. At the meeting, veterans and supporters sat on chairs loaned to the organization.

“Instead of borrowing chairs like these today, we’ll have our own,” said Dudoit.

“My hat’s off to this man – he has done a terrific job,” said Dudoit of Hafermann.

A recent meeting with the Hawaii VA health director started the discussion of how medical services on-island will be handled after Hafermann retires. Hafermann proposed that a doctor from Honolulu could come over once a week for the entire day to offer services, but also suggested looking into the option of getting a doctor on-island for the long term.

A rehab counselor from Maui comes to Molokai twice a month, while a federal VA benefits counselor is supposed to come every two months but visits have been suspended due to a “budget hold up,” Dudoit said he was told.

A VA mobile services van will also be visiting Molokai on Dec. 6 as part of a state-wide traveling benefits services program. They will be set up at Kaunakakai Ball Park, with details to follow.

Many veterans and their families think they receive more benefits than they actually qualify for at death, said Moku Buchanan of Molokai Mortuary, guest speaker at last week’s meeting. A veteran himself, Buchanan explained to fellow vets what funeral services are included by providing a DD 214 form.

Veterans are entitled to a flag and burial plot or niche in the columbarium at the Ho`olehua Veterans Cemetery. The county also gives a free bronze plaque or headstone, said Buchanan. Your spouse can be buried with you, but does not qualify for those benefits. Honor guards will also be sent over for the funeral at the request of the family. Buchanan said that is the extent of the free services for veteran burial; everything else must be paid for.

Buchanan also warned about the false promises of some life insurance companies.

“A lot of people will take your money but can’t service you on Molokai,” he said. “It’s like pulling teeth to get money from them… To be honest, it’s a rip-off.”

Buchanan said Purple Shield is the only life insurance company he recommends on Molokai.

Dudoit said veterans with questions about benefits or services can contact MVCV board members for information.

In the future, Dudoit said board members will hold monthly meetings, to which concerned veterans are welcome to sit in on, but general membership meetings will be held annually, or more frequently at the discretion of the board.