Seven years after Molokai veterans began the process to construct a center to call their own, the building is finally nearing completion. The group was granted a County of Maui building permit in May 2011 after years of permitting delays, lawsuits, protests and jumping through bureaucratic hoops. With the permit finally in hand, frustration turned to relief — but little did veterans know that two years later, the building still would not be complete. 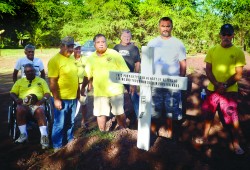 In this photo from May 2010, veterans gather around a cross erected on the ground of the then-future Veteran’s Center. The cross honored Molokai vets who died since the effort to build the center began in 2006. Photo by Catherine Cluett

A Vietnam veteran, Helm is now fighting another battle: cancer. In one last push to complete the building, fellow veterans and community members are holding a fundraiser to raise enough money to put the finishing touches on the center.

“If there’s anything that will put a smile on his face, it’s cutting that ribbon and opening [the center] up,” said Helm’s son, Michael, who is organizing the fundraising event on June 8. “What really bothered him was that guys have been passing away before it is built. Now here my dad is in kind of in the same situation, and if there’s anything I can do for my dad, it’s to try to help get that place done.”

The Fundraiser
The fundraiser, held this Saturday at Paddlers Inn starting at 4 p.m., will feature live entertainment from four bands and a surprise special guest and dinner specials of prime rib and mahimahi, a portion of proceeds from which will go toward the building fund. In addition, community members can buy a stone paver that will be engraved with an inscription of the buyer’s choice, and will line the walkway of the new veterans’ center. Black pavers can be purchased for $500, and gray pavers are $250. Contact Lauren Kikukawa or Michael Helm at Paddlers to donate.

While most of the building is already complete, Michael Helm said funds raised will cover the cost of final touches including the sewer system, cement work including pathways and flag pole, and installation of certified kitchen equipment. He said he thinks it will only take a week to complete after the fundraiser. The facility includes a kitchen, meeting area, museum and space for VA services.

“Vet centers are a valuable resource for Hawaii’s veterans and their families,” said Congresswoman Tulsi Gabbard. “Uncle Larry’s tireless work to bring these critical community-based services to Molokai is inspiring, and his vision is something worth fighting for.”

A Long Journey
The fight for the 3,000-square-foot building began in 2006. The Molokai Planning Commission finally granted a Special Management Area permit to veterans in July 2009 after zoning complications and building plan changes delayed the process for more than three years. Several months later, Molokai Veterans Caring for Veterans filed for a building permit from Maui County. In July of the next year, having still not received the building permit, about 15 fed-up members of the 300-member organization traveled to Maui to protest the delays, attempting to negotiate with county officials. The county cited concerns over sufficient water pressure at the building site for fire protection.

Veterans receive their building permit in May 2011

In September 2010, the group filed a lawsuit against the County of Maui. The case claimed constitutional due process and equal protection rights violations, as well as emotional distress suffered by veterans as a result of the building delays. The group’s attorney, James Fosbinder, called the situation “the most outrageous case of government bureaucratic abuse that I’ve seen.”

“We’re not looking for special treatment, we’re just looking for equal treatment,” said Larry Helm in 2011. He called the proceedings a “wrongful permit process,” adding he and his fellow Molokai vets felt betrayed by the government. The suit was eventually settled — but not before it cost veterans thousands in court fees, and recurrence of Post-Traumatic Stress Disorder symptoms to many vets from the process.

A Tireless Leader
Now, all the remains in the way of the building’s completion is funding.

“It is sad that it has taken this long… it has been very stressful,” said Larry Helm last week. “Now, it is an opportunity for everyone to work together to get it done.”

“If it wasn’t for him, there would be no new vet center,” said veteran Jesse Church. “He’s taken everything on his shoulders since day one. I just hope that he’s here to see it.”

Larry Helm has overcome many challenges during his lifetime, including his service in the Vietnam War, the death of his brother, activist George Jarrett Helm Jr., the death of his 15-year-old daughter in an airplane crash, overcoming cancer and two open heart surgeries. In his later years, his mission has focused on veterans’ rights and making the dream of a new veterans’ center a reality. For years, Molokai veterans have operated out of a small “bunker” off the main street in Kaunakakai.

“The Molokai Veterans Center is for the veterans of the past, those returning from war, future veterans and their families,” said Larry Helm. “They will be able to have a place of refuge and receive services which they so very much deserve.”

Michael Helm, himself a veteran, said his dad’s dream was not only limited to veterans, but to build a resource and gathering place for the entire community.

“Uncle Larry is the epitome of a servant-leader,” said Gabbard. “No matter the challenge, whether in combat in Vietnam, as a community trailblazer, battling cancer, or even losing his teenage daughter, Uncle Larry always stands for what is right and fights for those in need.”