Only an inspection and a certificate stand between Molokai Veterans Caring for Veterans (MVCV) and the official opening of their brand new, long-awaited center.

The center just needs approval from the Department of Wastewater, the last in a lengthy series of inspections. Members will then wait for the county to process their application for a Certificate of Occupancy, which MVCV officers said could take a few weeks. 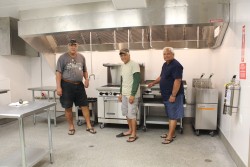 After nine years of construction and legal woes, the veterans said it’s the last agonizing step before the center is finished.

“It’s been a lot of hard work. … I tell people it’s not the start. Starting’s easy,” MVCV vice commander John “Longie” Dudoit. “It’s just like golfing. You can go out there and hit the ball as long as you like. The finishing part is to get the ball in the hole, and that’s the hardest part.”

Over the past few months, the center has undergone plumbing, electrical, health and water inspections. Work has been completed on a fully certified kitchen, covering up the wiring and installing floor drains.

“The sink’s all hooked up. Everything runs,” said Dudoit. “The state health inspector came in, she looked at it and said, ‘Right on.’”

The center is also now well-connected. The building boasts a working telephone line, satellite TV and Wi-fi, which MVCV commander Sam Makaiwi said was installed to allow Veterans Affairs representatives from Honolulu to help local veterans with claims during visits.

Five brand new insignia printed on Plexiglas also decorate the side of the building facing the road. The plaques, which display the seals of each military branch, were crafted by Dudoit’s son-in-law Sonnyshane Paleka. 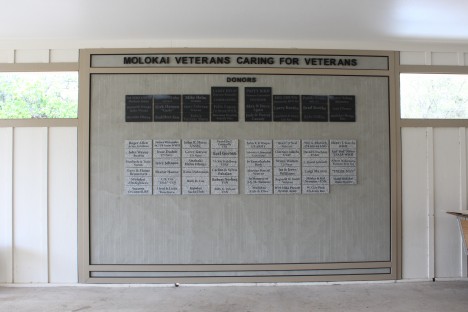 The Memorial Wall serves as both a tribute and a fundraiser. Photo by Colleen Uechi.

Resident Bryon Lentz has also been installing a “Memorial Wall” of tiles honoring both veterans and donors. The tiles were originally part of a 2013 fundraiser that raised $25,000 for the center. Gray tiles can be purchased for $250 or black tiles for $500, and inscriptions can include anything from the name of a veteran to the name of a local business or family. The wall currently contains 71 tiles, and MVCV officers said there will be no limit to the amount they’ll put in the center.

MVCV is also fundraising through Kokua Cards, a Friendly Market program that allows shoppers to benefit local organizations. Cashiers punch the card for every purchase over $5, and fully punched cards can be turned in for 90-cent donations to the organization. Lorna Dudoit, Longie’s wife and chairperson of the MVCV’s Kokua Card Program said they’ve raised $90 from these cards over the past two months.

MVCV members officially moved out of their former one-room location, dubbed “the bunker,” at the end of January.

While they don’t have the money for it right now, the MVCV’s next project will be paving the gravel parking lot surrounding the center. The officers said it could cost over $100,000. 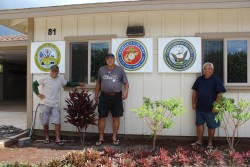 Five military insignia are represented on the side of the center. Photo by Colleen Uechi.

They also hope to fully furnish the main gathering area and are looking for possible donations of couches, tables and chairs. Diorec said they’re thinking of creating a museum-like set-up for the pictures and military memorabilia they collected during their time in the bunker.

However, for now, veterans are just focused on completing the center and helping as many local members as possible. Since they’ve started building in 2006, Makaiwi estimated that 50 to 60 members have passed away, including former MVCV commander Larry Helm, who started out as one of the main leaders on the project.

The organization has suffered through red tape and legal battles that included a 2010 lawsuit against the County of Maui after a Special Management Area permit took three years to obtain and a building permits encountered further delays.

With completion so close, MVCV officers said they plan to hold a grand opening for the center pending the final inspection and Certificate of Occupancy.