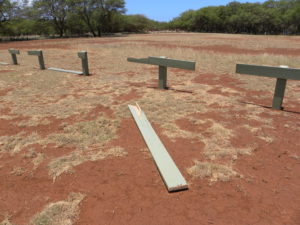 Four of the rails that section off the parking lot at Papohaku Beach were cut last Saturday. Photo Credit Zach Helm.

Newly-installed wooden rails at Papohaku Beach Park were vandalized last Saturday, according to the Molokai Police Department (MPD). Four wooden rails that section off the parking lot from the park were severed by what officials suspect was a chainsaw.

Zach Helm, Molokai District Supervisor for the county Department of Parks and Recreation, was contacted by MPD about the vandalism Saturday morning. The rails, which the parks department had just finished installing in January, were meant to keep ATVs and mud trucks off park grounds to prevent damage to the irrigation system and sprinklers, according to Helm. He estimates that the total cost to install the wooden railing was around $12,000.

“The whole idea was to maintain the park so that the general public could have a nice place to go to,” said Helm. “There’s no place for this [type of behavior].”

Helm is asking anyone with any information to report it to MPD, by calling 553-5355.

The Department of Parks and Rec has already ordered new lumber from Maui, and hope to have the railings repaired by June. In the meantime, Helm said they are using plywood as a temporary barrier at Papohaku.

2 Responses to “Vandalism at Papohaku Beach”