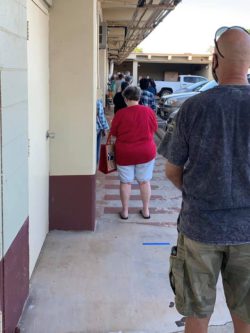 Molokai General Hospital administered about 700 COVID-19 vaccines last Thursday and Friday after receiving a shipment of 1000 doses last week, according to MGH President Janice Kalanihuia.
The hospital began Thursday working its way through residents in Dept. of Health vaccine phases 1a and 1b, which included healthcare personnel, residents over the age of 75 and frontline essential workers.

No appointment was needed, and the vaccines were administered on a first-come, first-served basis within the priority groups. Hospital staff directed residents to a special clinic set up where residents were screened to ensure they were part of phases 1a or 1b and answered basic health screening questions to receive the vaccine. After getting the shot, patients waited in the hospital’s dining room for medical observation for 15 minutes.

“We are hoping to clear out 1a and 1b as much as we can and then move into next phase next week,” said Kalanihuia last Wednesday. “We have no gauge on how much of the population is going to want the vaccine so we just have to see who shows up.”

After administering 270 doses on Thursday and more than 450 total on Friday, the hospital ended up opening up vaccinations to those in phase 1c later in the day on Friday. Phase 1c includes adults aged 65–74 years, people ages 16-64 with high-risk medical conditions, and essential workers not covered in phase 1b, according to the Hawaii Dept. of Health.

Kalanihuia said on Sunday about 300 doses were left to administer Monday, and she expected those to go quickly.

“It was crazy, people were so happy to get it and my staff did such a great job,” she said Sunday.

Residents who received the vaccine said lines were long but the process went quickly and smoothly.

The Molokai Dept. of Health office is also administering the vaccine.

“We will continue to accept registration forms according to availability of vaccines and in accordance with the recommendations from the Department of Health,” Molokai Public Health Nursing said in a statement last week. “We are currently in Phase 1b. You may pick up registration forms at our front office.”

After registering through DOH, eligible residents will be called for an appointment, the statement said. For more info about getting the vaccine through the DOH, you can call the Molokai office at 553-7880.

The COVID-19 vaccination consists of two doses, unlike the annual flu shot. A representative of the Molokai Public Health Nursing office said if residents received their first dose through the Molokai DOH office, they will be called for their second shot, which must also be administered at DOH. Those that had registered through DOH but were awaiting a call for their first dose could go ahead and receive it through MGH instead if they chose, but must notify DOH so they can be removed from the registration list.

Kalanihuia reminded residents who just received their first dose at the hospital, they need to return in four weeks for their second dose.

The recent batch of vaccines was shipped to the hospital directly from the manufacturer and there is no guarantee when another round of vaccines will be available through the hospital for additional residents but Kalanihuia said she is hopeful they will be receiving more.

Kalanihuia said the vaccines were only available to Molokai residents, who needed to show their driver’s license or a utility bill to verifying their address. She said vaccines are being allocated by state according to population so “people should get vaccinated in their place of residency.”

There is discussion among state officials that residents who receive the vaccine may be exempt from testing and quarantine requirements in the near future, but details have yet to be announced.